For full disclosure, I am an Igbo man. I am also one of the pundits currently being lampooned for cheering President Muhammadu Buhari to democratic power. Yet, knowing what I know now, I will lend that support all over again—and even more. Unless we have begun to view the history from a tainted lens, the thought of the very alternative, which was to bring back Goodluck Jonathan, remains a portent of much bigger crisis. More relatively, I strongly endorse Buhari’s latest mantra: “Change begins with me.” And that is exactly what this piece is set to accomplish.

Like every Nigerian leader, Buhari assumed the presidency with good intentions. The president is also working hard. Despite the economic mess left behind by the previous government, he is soldiering on with measurable progress on many areas. Regrettably, most Nigerians see the efforts as busy doing nothing. Accordingly, Buhari is making changes beginning from his very self. But there is one critical problem the General has continued to ignore that is firmly woven into the fabric of our current quest for economic revival: His Igbo problem.

For obvious reasons, the problem was initially waved off as a typical Igbo palaver. Sadly, it has now widened with untold social, political, and economic consequences. Before getting to the main gist, here is a cursory glance at the Igbo—just in case.

As one of the major Nigerian ethnic groups, the Igbo are the natural inhabitants of the South-East and some areas of South-South and North-Central zones of Nigeria. The people are predominantly Christians and uniquely boast of being the first or second largest population in most parts of the country. Known for their unique resilience, resourcefulness, can-do spirit and, of course, unbounded technological and scientific acumen, the Igbo represent the hybrid engine of Nigeria’s commerce. These diverse traits help in no small measure as they forge social, political, and economic influence around Nigeria.

But the influence is even beyond. The Igbo have embraced the reigning economic gospel that we no longer merely live in a country but in a world. Thus, with a heavy presence around the globe, they gleefully play a commanding role in the nation’s foreign exchange, foreign trade, foreign investment, as well as relationships. Not surprisingly, the Igbo in the Diaspora are a leading block contributor to the yearly amount of foreign money remitted to Nigeria, which is ironically more than the national budget. Very significantly, the people are one of the key drivers of Nigeria’s media home and abroad and thus have the potential to influence how the country is perceived anywhere.

The foregoing attributes are more than enough to discern that the Igbo is as important as any other ethnic group and ought to be carried along in the current change agenda of the government. Chinua Achebe was more eloquent in the book,There Was a Countrythat the perennial tendency to undermine the unique role of the Igbo in Nigeria “is one of the fundamental reasons the country has not developed as it should and has emerged as a laughingstock.” But events thus far suggest that Buhari might have been ill-advised to challenge the theory from the onset.

This apparent dissent is rooted in the 2015 presidential elections where a vast majority of the Igbo joined the South-South to vote en masse against Buhari’s winning candidacy. However, rather than use the historic mandate to rally the different political divisions towards common purpose, the president would shock the democratic world by revealing his plan to marginalise the zones that voted against him. Many pundits thought his statement was a mere gaffe. But the records afterwards seem to suggest that Muhammadu “Okechukwu” Buhari actually meant the threat of vendetta against the Igbo, particularly those from the South-East.

Critics are free to join here. But there is no gainsaying that the Igbo people are truly marginalised in the current scheme of things. As I had penned in October 2015, the upper echelon of Buhari’s government is a preview. “The underlying rationale in this case is that the positions of the President, Vice-President, Senate President, Speaker, Chairman of the ruling party, and the Secretary to Federal Government have been staked in the past 16 years as the main thrust of the party in power and thence rotated among the six political zones of the country.” Yet, the South-East was conspicuously denied its share. Moreover, it is no coincidence that the same South-East Nigeria, the mainstay of the Igbo nation, is the only zone without a personnel presence in the nation’s security leadership apparatus.

This outlook coupled with a stoic indifference by the president triggered outrage in the land. It straightaway provoked the Movement for the Actualisation of the Sovereign State of Biafra (MASSOB), then a sedate outfit, to declare “that Buhari is not seeing Ndigbo as part of Nigeria.” The Indigenous People of Biafra (IPOB) was not to be left behind, as it heightened its call for secession from the country. Their activities, however, were met with brute force, including the detention without bail of its leader, Nnamdi Kanu. This plight is today commonly linked to the birth of a new militant group under the auspices of Niger Delta Avengers. We are all living witnesses to the economic repercussions of the Biafran movement and their Avengers ever since.

The title of this piece will not be apt if the empathy for the current wave of Igbo marginalisation did not flow past east of River Niger. Recognising that the ruling party treated it as business as usual, the opposition from the highly influential South-West Nigeria, led by the trio of Ayo Fayose, Femi Fani-Kayode, and Femi Aribisala capitalised on the saga to strike back. What just took place here, and painfully so, is that Muhammadu Buhari had inadvertently provided a lifeline for the corrupt brigade of the immediate past regime—from the East, North, and West—to resurface and now grandstand as latter-day fighters of what is widely believed as naked injustice to the people of the South-East. And what followed, thereafter, was a montage of propaganda that successfully painted the president as an unapologetic bigot determined to punish not only the Igbo but also the entire Christian-dominated South.

The development caught the attention of the Northern zone of the Christian Association of Nigeria, which lamented as follows: “while there were volumes of allegations from the South that the appointments made so far were in favour of the North, facts on the ground revealed that those appointments were lopsided in favour of Muslim North to the detriment of Northern Christian community.” More dauntingly, many blame part of the current crisis on Buhari’s economic policy, particularly foreign exchange, which is believed to be tribally skewed to specially benefit his Fulani kinsmen who control bureaus de change across the country.

Today, not only is the national economy in recession, the negative opinion of Buhari is growing beyond our shores. Although a number of world leaders showered praises on him during the recent UN session in New York for giant strides against corruption and terrorism, which is very gratifying, a creeping concern within the international community remains that Nigeria’s president is a dictator, tribalist, sectionalist, misogynist, and religious bigot—all in one person. This emerging view—whether real or not—explains why US Congressman Tom Marino, a member of the Foreign Affairs Committee, on a September 1, 2016 letter, would warn the United States to withhold selling arms to Nigeria until Buhari demonstrates true “commitment to inclusive government and the most basic tenets of democracy: freedom to assemble and freedom of speech.”

This spectre is gloomy, square. It does not bode well for an economy in recession. In short, it scares away investment whether local or foreign, especially in this era of economic globalisation where millions of Nigerians in the Diaspora, the Igbo well included, represent the convex lens through which the world sees Nigeria. This also goes to say that even as President Buhari might have done a good job in the area of corruption, the fact that he is generally perceived as condoning gross injustice in another area renders his entire effort pyrrhic.

The central problem is complex and thus difficult to capture at once. But the solution is quite simple. For every question raised in this essay sufficiently answers itself. Buhari has to simply trek back to where the rain started beating him and make amends. Allowing the problem to linger not only threatens the chances of economic revival but also the hard-earned change. Even if he is not thinking of 2019, which he should, Mr. President cannot feign ignorance of the fact that his queasy quandary with the Legislature has his Igbo problem written all over it. Very true!

Note: This piece was written by SKC Ogbonnia.
The views and opinions expressed here are
those of the author and do not necessarily
reflect the official policy or position of Kingdomboiz.com 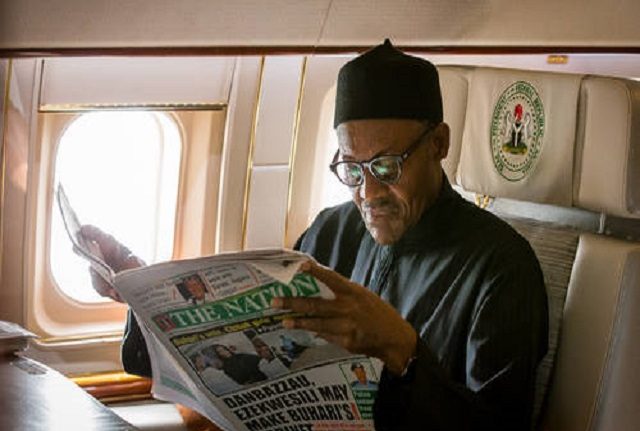