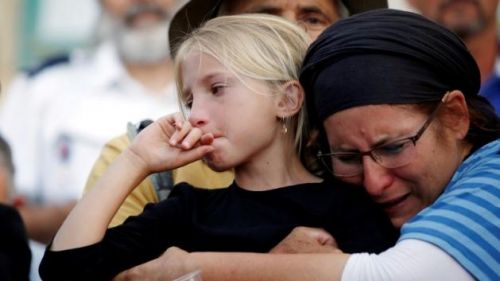 A 13-year-old Israeli girl with U.S. citizenship
has reportedly been stabbed to death by a
Palestinian man who broke into her bedroom
on Thursday.

The BBC reports that the girl, Hallel Yaffa Ariel, was attacked while she slept by 19-year-old
Mohammed Tarayreh from the nearby village of
Bani Naim.

Ariel was repeatedly stabbed in her upper
body before a security guard responded to the
scene, but was also wounded by the attacker.
Tarayreh was later killed by two other security
guards patrolling the settlement.

The murder has shocked the community, and
Israeli Prime Minister Benjamin Netanyahu
spoke out about the crime, saying: “The
horrifying murder of a young girl in her bed
underscores the bloodlust and inhumanity of
the incitement-driven terrorists that we are facing.”

Netanyahu added, “The entire nation deeply
identifies with the family’s pain and declares to
the murderers: You will not break us.”

Violence between Israelis and Palestinians in
the West Bank has been on the rise in the past
few months, with 34 Israelis having been killed
in various attacks since October. Another 200
Palestinians have also been killed, though
Israel says those have mostly been attackers.

The security guard who initially responded to
the attack in the girl’s home reportedly suffered
multiple stab and gunshot wounds, and is in
serious condition at a local hospital.

Rena Ariel, the girl’s mother, told Israel’s
Channel 2, “Just like any teenager on summer
holiday, my daughter was asleep, calm,
relaxed. A terrorist murderer came and
murdered her in her bed.”

The Associated Press reported that Adnan
Tarayreh, a cousin of the killer, speculated that
Mohammed might have been motivated to
carry out the attack due to the death of another
cousin who had rammed his vehicle into
Israelis in Kiryat Arba.

The girl’s funeral took place on Thursday near
Hebron, another city with high tensions
between the Israeli and Palestinian
communities.

U.S. Secretary of State spokesman John Kirby
responded to the news by stating: “This brutal
act of terrorism is simply unconscionable. We
extend our deepest condolences to her family.
We also understand another individual who
was responding to the attack was wounded by the attacker. We extend our hopes for a quick
and full recovery.”

CNN noted that Netanyahu is planning to revoke work permits for members of Tarayra’s
family, and is seeking approval to demolish the
attacker’s home.

“The fact that settlements are illegal under
international law does not make their
inhabitants, children as well as their parents,
subject to lethal attack. At the same time, the
killing provides no legal justification for the
Israeli government to punish the alleged attacker’s family members.”