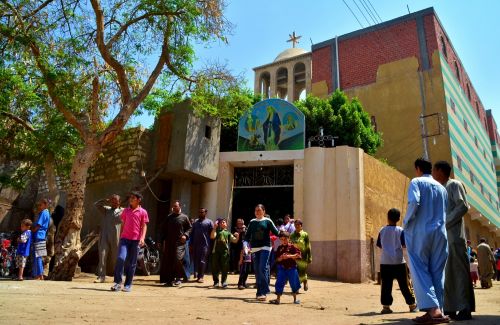 At least 15 Muslims were arrested in the Egyptian
village of Abu Yacoub on Saturday for setting fire to
Coptic Christians’ homes and a nursery, allegedly
because they feared they would be used as
churches.

The persecution of Christians has been on the rise
in Egypt this past year, with similar attacks being
reported in other villages. The state-owned Ahram
Online reported that five buildings, along with a nursery, were attacked and burned down Friday
night by the Muslim mob that wrongly believed the
homes and nursery would be used as Christian
houses of worship.

The Ministry of Endowments has reportedly sent
representatives to Minya to talk to local villagers in
response to the arson attack, and encourage them
to avoid violence and instead choose “love and
cooperation.”

The nursery, the Egyptian Family House, was
founded by then-Prime Minister Essam Sharaf in
2011 as a means to foster religious unity.

Al Hayat newspaper said that the delegation from
the Ministry will look into finding permanent
solutions to calm the village and restore peace
between the Muslim and Christian populations.

Earlier in July a larger mob of 300 Muslims burned
four Coptic homes in the Kom El Loofy village in
Samalout, Upper Egypt, again because they
believed the Christians were looking to build a
church on the land.

Christian persecution watchdog groups, such as
Christian Solidarity Worldwide, have spoken out
strongly against attacks on Christians and the
burning of Coptic homes

“The torching of Coptic homes in Kom El Loofy
underscores once more the urgent need for Egypt’s
House of Representatives to enact a law regulating
the construction and renovation of houses of
worship in a manner that guarantees the right of
Christians to worship in community with others,” CSW Senior Press Officer Kiri Kankhwende said after the Kom El Loofy attack.

“We echo the Bishophric of Samaloot in
condemning the imposition of reconciliation
meetings as a replacement for the rule of law
because they impose ad-hoc, unjust and often un-
constitutional conditions on the victims of sectarian
violence and perpetuate impunity for the perpetrators. Rule of law must be upheld, and must
include security services nationwide serving every
community without discrimination on the grounds
of religion,” she added.

Christians are hoping that the Egyptian government
will pass a new law in parliament by the end of the
year that will allow for the building of churches,
which has caused several such attacks.