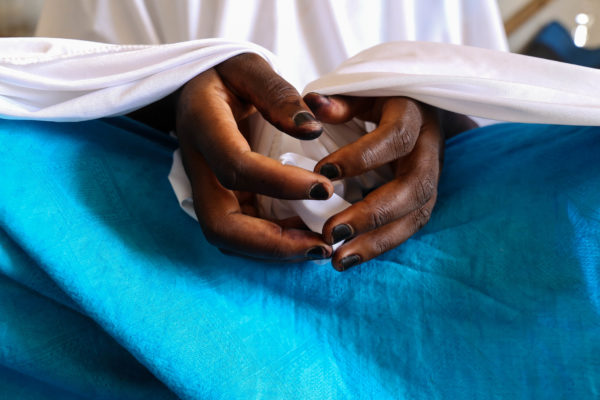 Two years ago a 15-year old ‘Aminata’ was taken by Boko Haram against her will and forced to marry an insurgent. She had no choice but to live with the insurgents, for two years, until she finally managed to escape. She is now an internally displaced person (IDP) living in one of many camps established in north-eastern Nigeria and in this interview with UNICEF’s Kent Page, ‘Aminata’ shares her heartbreaking story of suffering and fear while she was held captive.

According to UNICEF, more than 7,000 women and girls have been held and subjected to violence by Boko Haram. Most are believed to have been raped or forcibly ‘married’ to their captors, and many, like Aminata, became pregnant as a result.

Read the story of ‘Aminata’ below.

I came in contact with Boko Haram insurgents in my hometown in Borno State, north-eastern Nigeria. They saw me at my uncle’s house during their first attack on our town. I have lived with my uncle since I was two years old. My biological father and family live in Cameroon.

Boko Haram invaded the town and convinced my uncle to join them. They also asked if there were any girls in his compound. They offered 1,000 naira for each girl.

I was sitting next to my grandmother when they dragged me to a car. They took me to an unknown location outside my town. They had taken me and another 14 girls from my neighbourhood. I was held there for two months and then I was forced to marry one of the insurgents. Before you marry an insurgent, you are a maid. You wash plates and cook for the insurgents. But when you get married, you become a wife and also focus on only him.

The ‘wedding’ had nothing. There was no clothing, no lotions, no creams, no presents. It was just in my old clothes that I went to the house of my ‘husband’, which was just a hut with a room in it. That was where we lived. And every time he wanted to have sex I refused, and then he would rape me and beat me up. I cannot count the number of times he has beaten me.

I lived there with the armed group for two years. It was a very bad experience. I have witnessed terrible things, including the slaughtering of women in a town by the insurgents. They killed women who refused to marry them. Once they caught someone who had married another wife without telling them. They buried him up to his head in the ground. Then they stoned his head until he died. It was a public punishment that we were forced to watch.

In some villages, when they attack, they steal cattle and sell it off before feeding their wives and children. We didn’t ever have enough food. And any food we did get, didn’t have any condiments. The insurgents have to steal food from villages or attack villages before we eat. They don’t have any food.

My insurgent ‘husband’ had three wives before me who had become suicide bombers. But he decided he wanted me to remain as his ‘wife’. But two weeks later, he married another wife. I was very scared.

My ‘husband’ told me that if he decides or wants to, he will send me and my co-wife to town as suicide bombers. I was so scared. Three days after that, I told one of the women that I was going to a nearby village to visit my grandmother.  My ‘husband’ gave me three days for the visit.

I was with my grandmother in that village when the military arrived to fight the insurgents. After the fighting, the military took me with them to Bama. I was in Bama with the military for a month before I was brought here. My uncle and his brothers are still with the insurgents, and I have seen them carry out terrible acts, including killing people.

I really miss my family, and I wish I could see them again. We have been separated for too long. They live in Cameroon. I sincerely hope that everyone who has been taken like me can leave Boko Haram and be reintegrated back into society. My co-wife used to tell me to stop thinking about my parents, but she also said, “Don’t worry, you will find them one day.” I hope it is true.

I have been living as an IDP here in this camp for four months. I am pregnant. When I discovered I was pregnant, I was so unhappy, because it was my ‘husband’ who did it. The pregnancy is very difficult for me. But people here in the camp have been kind. People ask me how I escaped, and when I tell them, they say “Thank God you escaped!”

It is good, because although people know I was with the insurgents, so far no one has treated me badly. I live with people from my LGA [local government area] here in the camp, and they understand and treat me well. They have been very supportive. I only have a craving for certain foods which I cannot get here, and to see my family.

I hope to get married one day in the future. And to start a business. But, because I have never been in school, I cannot start doing that now, unfortunately. I also want villagers who had to flee the conflict to remain here for a little while and not rush back to their towns and villages to resettle. We suffered there tremendously.

But I am still happy. I am extremely happy I am no longer with the insurgents. I want to thank all the people who have helped me. All I want now is to see my family again.

Read more about it here.