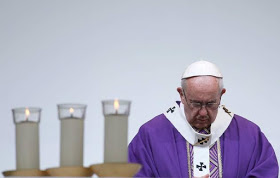 A New Jersey teen has pleaded guilty to a plot allegedly inspired by the Islamic State group to kill Pope Francis in 2015, during a public Mass in Philadelphia, US.

The suspect, Santos Colon, admitted on Monday in a federal court in Camden that he attempted to conspire with a sniper to shoot the Pope during his visit to Philadelphia and set off explosive devices in the surrounding areas.

According to the US Justice Department, Santos Colon, 15 years old at the time, sought to recruit a sniper to shoot the pope as he celebrated mass in Philadelphia on September 27, 2015. Colon also allegedly planned to set off explosives.

But the teen unknowingly recruited an undercover FBI agent for the job, and was arrested quietly 12 days before the event.

The US citizen from Lindenwold, New Jersey, was charged as an adult with one count of attempting to provide material support to terrorists on Monday and faces up to 15 years in prison.

He also faces a fine of $250,000, or twice the amount of any financial gain or loss from the offense, prosecutors said.

However, no date has been set for sentencing and the investigation is ongoing