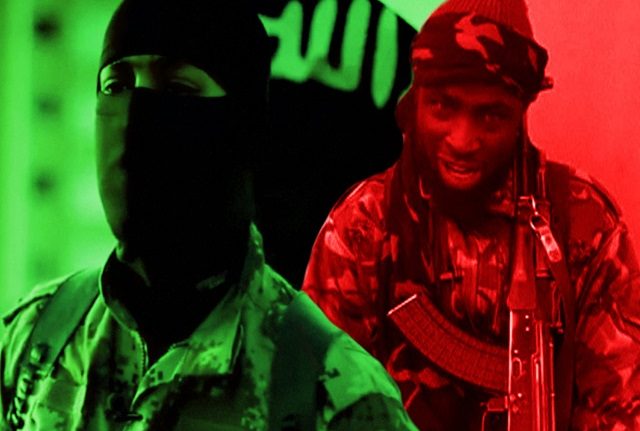 No less than 18 members of the Boko Haram
Islamist militant group and their families have
surrendered to Nigerian military after bloody
clashes erupted between factions loyal to the
group’s founder, Abubakar Shekau, and the IS-
backed Abu Musab Albarnawi in northeastern town of Monguno, Borno state, AFP said on
Thursday.

They are under custody of Monguno
command and we believe the dual battle
between Albarnawi and Shekau’s camps
may have compelled them to sneak out
and surrender,” Ali Mohammed, a member
of a vigilante group in northeastern town of Monguno, said on Wednesday

Trouble started within the hegemony of the sect after the Islamic State group announced Abu Musab
al-Barnawi, the son of Boko Haram’s founder Mohammed Yusuf, as the sect’s new leader to replace Abubakar Shekau.

Even though his allegiance remains with the Islamic States, the undeterred Shekau insisted that he was still in charge of the Nigerian-based ferocious death cult

Sources with impeccable cognisance of the happenings disclosed that there have been deadly skirmishes between Boko Haram’s factions led by Shekau and IS-backed al-Barnawi respectively.

Last Thursday, several fighters from Shekau’s camp were said to have been killed in two separate gun battles with IS-backed Barnawi gunmen in the Monguno area of Borno State near Lake Chad

A source, Mele Kaka, told AFP that: “The
Barnawi faction launched an offensive
against the fighters of Shekau faction who
were camped in Yele and Arafa villages.

“In Yele, the assailants killed three people from the Shekau camp, injured one and took one with them, while several others were killed in Arafa.”

“The Barnawi fighters told villagers after each attack that they were fighting the other camp because they had derailed from the true jihad and were killing innocent people, looting their property and burning their homes.

“They said such acts contravene the teachings of Islam and true jihad.”

Meanwhile, the Nigerian military has declined to comment on the reported in-fighting when contacted by AFP.