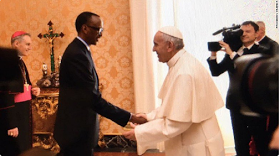 23 years after, Pope Francis seeks forgiveness for the “sins and failings” of the Catholic Church during the 1994 Rwandan genocide.

During a meeting with Kagame on Monday at the Vatican, the Pope expressed “solidarity with the victims and with those who continue to suffer the consequences of those tragic events”.

Pope Francis acknowledged that priests, nuns and members of the Catholic church had succumbed to hatred and violence in Rwanda, “betraying their own evangelical mission,” the Vatican said.

Rwanda’s foreign minister Louise Mushikiwabo, who accompanied President Kagame on the trip, said the meeting was a positive step forward. “It allows us to build a stronger base for restoring harmony between Rwandans and the Catholic Church,” she added in a statement released by the presidency.

In November, the Catholic Church in Rwanda apologized for its members’ role in the genocide that saw hundreds of thousands of Rwandans killed in 1994.   In 1994, Hutu extremists in Rwanda targeted minority ethnic Tutsis and moderate Hutus in a three-month killing spree that left an estimated 800,000 people dead.

Four Catholic priests were indicted by the UN International Criminal Tribunal for Rwanda for their role in the genocide in 2001.