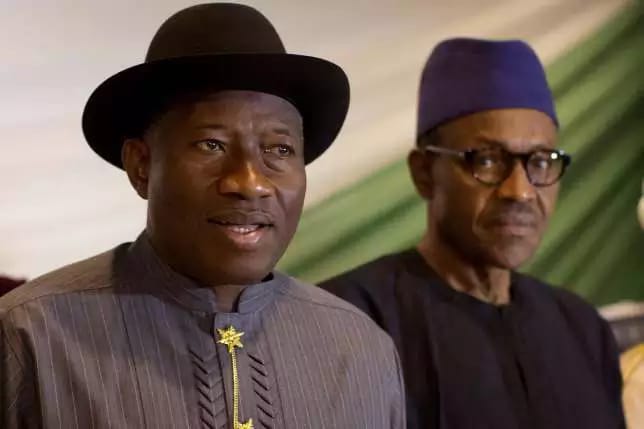 Friday, August 12, 2016 was an opportunity for
two Nigerian leaders to speak to the youth
across the country.

It was the International Youth Day and President
Muhammadu Buhari and his predecessor, Dr
Goodluck Jonathan both sent their statements, the
former through a statement in the form of a letter
and the latter through a post on his Facebook wall.

Buhari and Jonathan both sent statements to the
youth

Both painted the youth in the country in glowing
colours, but in different ways.

These are some takeaways from their individual
statements:

1. Former President Jonathan showed a sharp
memory when he recalled two names, Chimamanda
Adichie, a novelist that is making Nigeria proud,
and Jelani Aliyu, a senior creative designer for
General Motors and project team leader for the
design of the Chevrolet Volt. Through them, he commended the youth saying they have continued
to make the country proud.

President Buhari did not mention any name, but
spoke generally as a leader of the country, who
remembers how the youth played prominent roles
to see him climb the ladder of success in the 2015
general election.

2. Jonathan is no longer in government. So it would
have been difficult for him to make promises.
Buhari latched on his being in government to sell
himself to the people again. The first time he did this
was when he presented his inaugural speech on
May 29, 2016 when he said he was everybody and for nobody.

Now that the celebrated speech has waned
because of the many challenges the government is
battling as well as the belief that the government is
actually for a segment of the country, it was
encouraging to the youth to hear the president say:
“This government belongs to you.”

3. Jonathan recalled: “When Nigeria’s economy
became the largest economy on the African
continent, it was and is because of our youths…
When we perform exploits at the Olympics and
other sporting events, it is because of the great
Nigerian youths.”

However, this was not the case with Buhari. He is
weighed down by increasing unemployment,
insecurity (kidnapping, attacks by herdsmen and
militancy). There was a recent prediction that the
country’s crime rate as well as the number of ladies
going into prostitution could soar. Therefore, what Buhari needed to do was assure the people again.

“We have launched a number of initiatives targeted
at expanding the economic opportunities available
to young Nigerians…N-Power, our job creation
scheme, for which applications are ongoing, will
employ 500,000 of you in agriculture, education,
healthcare and technology.

“The Aso Villa Demo Day will soon bring 30 of the
most innovative young Nigerians to the State House
to showcase their talent in providing technology-
based solutions to some of our most challenging
problems,” he said.

4. While they differed in some ways, they both
agreed in another. Jonathan said: “Nigeria and
indeed the world have no greater asset than our
youth and you will continue to be my personal
inspiration.”

On his part, Buhari said: “We are mindful of the fact
that Nigeria has one of the youngest populations in
the world. Those young people are immensely
energetic and talented, consistently blazing the trail
in the arts, sports, business and technology. We are
proud of what you have done and what you are able to do.

5. Jonathan further urged the youth “to continue to
develop yourself through positive endeavors. The
future is yours. God bless our youths.”

In his Buhari’s case, there was no need for that.
There should be hope for the people: “The
Government Enterprise and Empowerment
Programme (GEEP), part of our N500 billion Social
Investment Programme, will provide soft loans to
thousands of young entrepreneurs across the country. These are just some of the many initiatives
we have designed and are implementing for you.”