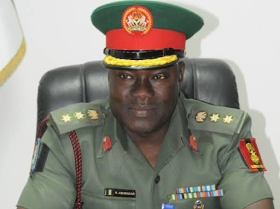 No fewer than 8000 Boko Haram members have
voluntarily surrendered to the “Operation Safe
Corridor’’ run by the Nigerian Army in the North-
East. This is according to the Director of Defence
Information, Brig.-Gen. Rabe Abubakar, who
disclosed this at a lecture organized by the FCT Correspondents’ Chapel of the National Union of
Journalists (NUJ).

Abubakar at the lecture said the surrendered
terrorists were being kept at a camp in Gombe
where they would be “deradicalised’’ by the
military. He added that more than 10,000 Boko Haram captives had been rescued by the military
and that some of them were reunited with their
families while others were taken to Internally
Displaced Person’s (IDP) camps. He disclosed that
the military would soon launch “Operation Safe
Corridor’’ to address the menace of herdsmen across the country…