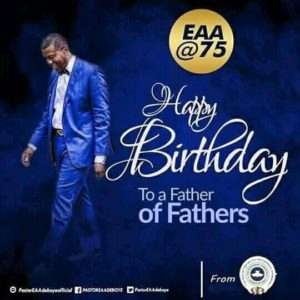 The governor made this statement in a press release, issued in honour of the pastor’s 75th birthday.

The governor congratulated the clergyman in a statement signed by Yomi Layinka, his Special Adviser on Communication and Strategy, and made available to newsmen in Ibadan on Friday.

Ajimobi, who described Adeboye as “a true shepherd in the Vineyard of God,’’ said that the cleric had healed the broken-hearted and the weary.

He said that Adeboye had also turned backsliders to their creator through fervent prayers, prophetic utterances and spiritual guidance.

“Papa Adeboye’s untiring efforts at attending to the welfare and well-being of Christians have resulted in the expansion of RCCG which is undoubtedly the fastest growing church in Africa.

“His fatherly role has also made him a rallying point for the Christian community in Nigeria,’’ he said.

Ajimobi noted that Adeboye played `significant role’ in stabilizing the polity through his constant prayers and spiritual interventions for Nigeria which had helped in holding the country together.

He said: “I am particularly fascinated by Papa Adeboye’s uncommon humility, simplicity, brilliance and articulation.

“All these have served as an inspiration to me in the running of the affairs of Oyo State.

“I have also been encouraged by his periodic visits and prayers for my government and the people of Oyo State, particularly through his regular attendance of our annual Christmas carol.’’

The governor prayed God to grant the renowned cleric long life and sound health in his service to Nigeria and humanity.