African-Americans Troop Out For Clinton 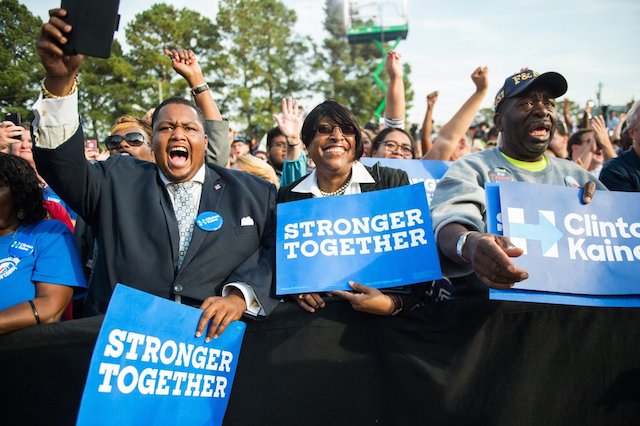 African-Americans have trooped out to vote for Democratic candidate Hillary Clinton as the race to get into the White House tightens between her and Republican rival Donald Trump.

All the African-Americans interviewed by theNews Agency of Nigeria (NAN) at Hampton and Newport News Voter Registrar office, said they voted for Clinton with some preferring anonymity.

There were more women and aged turnout, with many of the aged in wheelchairs and some assisted by their children.

Tiffani Willams, 18, a first-time voter, said the voting process at the absentee voter location in Newport News was smooth as she waited between five and 10 minutes to vote.

“I voted Hillary. I’m praying that Hillary gets into office. I don’t support Trump’s views in relation to the U.S. border or war,” she said.

Another African-American voter, Shawntry Williams, said “I’m a Hillary supporter but I’m weary and I’m worried that people may not take this election seriously enough as they should,” she said.

Mannie Davis, another voter, simply told NAN that “I voted Democrats all the way” just as Frances Mears and Janet Anderson, who also voted for Hillary and other Democratic candidates.

According to La Dutch,

“The right person to be elected president is Clinton, she’s the best candidate.

“Trump does not know anything about government or governance but Hillary has got the experience”.

“I voted because I felt, hopefully, Clinton would win, she’s less of two evils and I voted for her.

“I don’t necessarily believe in all her policies and characteristics but she’s the only one among the candidates that can carry on with Obama’s legacy from where he stops.

“Trump is going to break everything that has been fixed and that’s going to be disastrous.”

“I am worried about the outcome of the election and I am just trusting the Lord now.

“I am a Democratic party loyalist but aside that, Clinton has the background to be the president.

“She worked side-by-side with Bill Clinton, who was a very good president. Unlike Trump who has insulted everybody.

“But neither of the candidates has addressed the issues of affordable housing; the issues of homelessness and hunger are the real issues that affect the people”.

An absentee voter at Newport News, Vanessa Gamble, said neither of the candidates address the main issues worrying voters.

“Though I voted for Clinton, neither presidential candidate has addressed homelessness and hunger, these are the two most important issues,” she said.

There were no reported issues with voting at the Hampton Voter Registrar’s Office, or at the City Centre voter absentee location in Newport News.

Yarborough said all of her riders had been Clinton supporters.

“I asked them because I was curious,” she said.

The Registrar, Hampton Voter Registrar, Tara Morgan, said there was a large turnout of voters compared to that of 2012 election.

Morgan said the exercise had been very smooth.

NAN reports that no security official was sighted throughout the voting exercise but the official said that “security officials are available if we need them but there’s not been any need for them”.

Newport News also had a steady turnout.Assistant Registrar Amanda Corbettestimated that the centre could record an even or higher turnout than what obtained in 2012.

The list of permitted reasons to vote absentee in Virginia include being out of town on election day, being ill or disabled, working 11 or more hours on election day or being a student going to school outside of the area where you are registered to vote.