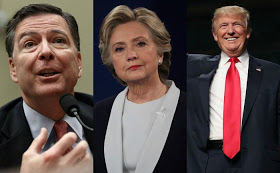 FBI Director James Comey has revealed that the agency will not pursue criminal charges against U.S presidential candidate Hillary Clinton barely a day to the elections, after shocking the American public last month when he sent a letter to Congress saying the FBI had discovered emails that could be connected to the now-closed probe of whether Clinton mishandled classified information while secretary of State.

“Based on our review, we have not changed our conclusions that we expressed in July,” Comey wrote in the new letter to congressional committee chairmen.

According to Comey, the FBI won’t be going through with investigation of Hillary Clinton as they’ve searched through thousands of emails found during the FBI’s separate investigation into a sexting incident by Anthony Weiner, the estranged husband of top Clinton aide Huma Abedin.

“We went through this as fast as we could,” a senior FBI official told CNN. ‘We worked round the clock’

“Keep in mind we are focused on intent,” the official said.

“We know there are classified materials, but that doesn’t change the conclusion reached back in July.”

Trump, who is closing down Hillary in polls nationally and in key battleground states, reacted to the news, saying it isn’t possible to examine 650,000 emails in eight days.

“You can’t review 650,000 new emails in eight days. You can’t do it, folks,” Trump said in a Minneapolis rally on Sunday, adding, “Hillary Clinton is guilty. ‘

‘She knows it, the FBI knows it, the people know it, and now it’s up to the American people to deliver justice at the ballot box on November 8.”

“She wants virtually unlimited immigration and refugee admissions from the most dangerous regions of the world to come into our country, and to come into Minnesota, and you know better than anybody,” he said.

“Her plan will import generations of terrorism, extremism and radicalism into your schools and throughout your communities. You already have it. When I’m elected president, we will suspend the Syrian refugee program and we will keep radical Islamic terrorists the hell out of our country.”