After Muhammad Ali Met Billy Graham, He Said: If I Was A Christian, I Would want To Be A Christian Like Him 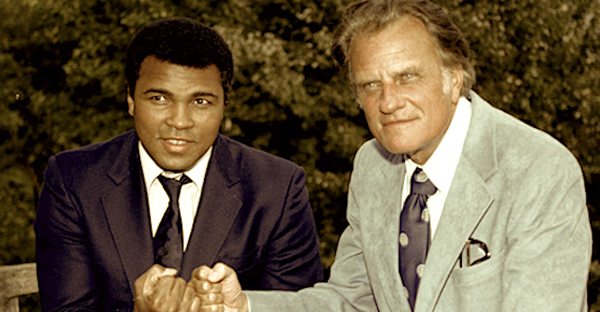 During the Republican primary, Donald
Trump was criticized for failing to challenge a
supporter who stood up and declared,* “We have a problem in this country—it’s called
Muslims. We know our current president is
one.” Later, after the shooting in San
Bernardino, California, Trump called for the
banning of all immigration of Muslims until
“we know what the hell is going on.” His rise to being the presumed nominee, and his
considerable inroads into grassroots
evangelical votes, accompanied (and no
doubt benefited from) such messages.

Around the same time late last year, the
Wheaton College political science professor
Larycia Hawkins was put on “leave” following her donning of a hijab and
proclamation that Muslims and Christians
worship the same God. Later, Hawkins and
the school came to a mutual parting of the
ways, and Hawkins has since taken a new
post at the University of Virginia. Still, the episode led some to wonder whether there was to be a repeat of earlier works about the
scandal of the evangelical mind, and a
possible brain drain from campuses such as
Wheaton.

The contemporary Muslim-American
experience of freedom, surveillance, and
suspicion reflects much of the long history of
race, religion, and “difference” in American
history. The fears harken back to nativist
movements familiar in American history, most especially to the Know-Nothing Party of
the 1850s, which tried to ban Catholic
immigration and perceived Catholics as a dire
threat to the American Republic, just as
some Americans perceive Muslims in the
2016 electoral cycle. Perhaps most importantly, it suggests the ways in which,
for some Americans, “Muslim” elides
categories of both race and religion, and stirs
up deep-rooted American tropes of the
bounds of racial and religious habitation.

The passing of Muhammad Ali calls to mind a
period both of that surveillance and
suspicion, but also a different era between
Muslim-Americans and the evangelical
establishment that seems to be waning. In
1979, Ali visited Billy Graham in Montreat, North Carolina, after which Graham declared that “Ali’s primary beliefs are something we could all believe.”

Graham perceived Ali as a “healer” (painfully
ironic now, as this was just about the time
that Ali’s Parkinson’s disease was becoming
evident), and the two shared things they had
in common, including “love and belief in
mankind.”

Ali came away from the meeting impressed with Graham: “I always said if I was a
Christian, I would want to be a Christian like
him.” Graham later wrote to Rabbi Marc Tannenbaum, Director of Interreligious
Affairs of the American Jewish Committee,
and suggested that he meet with Muhammad
Ali, as Graham thought him to be warm to
the state of Israel and supportive of Jews
generally.

That was then, but this is now; that was Billy
Graham’s evangelical vision, while his
son, Franklin, has taken a stand with Trump
on banning Muslims. And Trump’s
endorsement by Paul Ryan this week indicates
that, all in all, he and the House Republicans will be just another brick in Trump’s wall.
Ryan’s resurrection of compassionate conservatism and the elder Graham’s more capacious visions for evangelical embrace of
others have fallen, like George Foreman in
1974, to a rope-a-dope strategy.