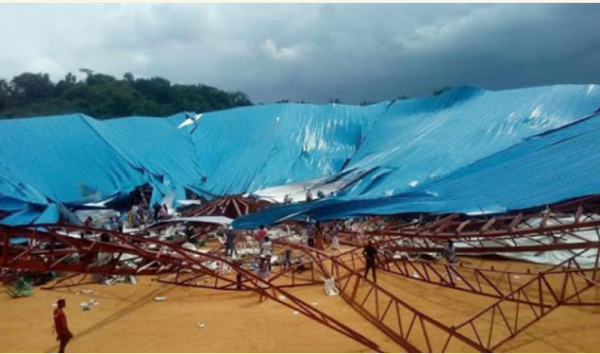 President Muhammadu Buhari on Saturday night condoled with the families of the victims of the tragic collapse of the Reigners Bible Church International, Uyo, Akwa Ibom.

The President’s condolence message was made via his twitter handle.

President Buhari, who called Gov. Udom Emmanuel of Akwa Ibom to commiserate with him on the tragic incident, asked him to convey to the people of the state “the deep sorrow felt by me, and by the entire country over this tragedy”.

“This evening I spoke with Gov. Udom Emmanuel to commiserate with him on the tragic collapse of the Reigners Bible Church in Uyo.

I asked the governor to convey to the people of Akwa Ibom state the deep sorrow felt by me, and by the entire country over this tragedy.

I pray that the souls of the deceased will rest in peace, and that the injured will experience quick recovery.
Any tragedy that affects any part of Nigeria affects all of us. Our thoughts and prayers continue to be with the people of Akwa Ibom,”Buhari tweeted.

Ekerette Udoh, Personal Assistant to (Information) Gov. Emmanuel, in a statement issued on Saturday, said the governor was present at the Reigners Bible Church International when it collapsed.

According to him, the governor personally supervised rescue operations and evacuation of the injured to the hospital. 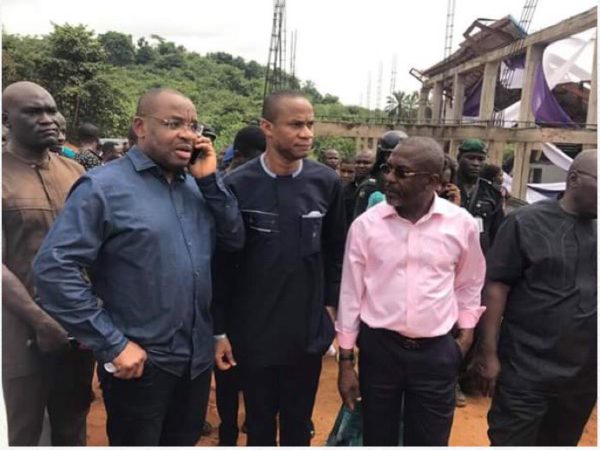 “I was present at the church during the incident and shared in the agony of the moment. Thereafter, I personally supervised rescue operations and evacuation of the injured to the hospital. I directed all emergency agencies of government especially the construction companies to be involved in rescuing people. I declare Sunday, December 11 and Monday, December 12 2016 as days of mourning in Akwa Ibom.”

One of the aides, who rescued the governor, was said to have died at a nearby hospital where he was rushed to.

A security officer, who did not want to be named, said many dignitaries who accompanied the governor to the church also died.

PUNCH gathered that the Secretary to the State Government,Etekamba Umoren, also shattered his head in the incident. He was said to have been taken to an undisclosed hospital in the state.

It was gathered that construction works on a section where the ordination held were rushed because of Saturday’s event. The church has an estimated 10,000-seater capacity. Two cranes belonging to construction giant, Julius Berger, were used to clear the debris.

A clash was averted between the police and some residents as the latter tried to calm frayed nerves.

The state Commissioner for Works,Ephraim Inyang, refused to speak with journalists when he was approached. He ordered them to leave the place.

Yenime Ekpo, who is a mother to one of the victims, Tony Brown, 46, with six children, said they were worshiping in the church when the building collapsed.

She stated that Brown was trapped in the rubble for many hours along with others before she was rescued.

Saying she was unsure of her son’s survival, Ekpo noted that they were not members of the church but only went to witness the ordination.

Also, a student of the University of Uyo, Department of Communication Arts, Uduak Effiong, said she lost three of her course mates to the incident.

She stated that when the building collapsed, a pillar fell upon a woman and tore her body.

She said, ‘I saw over 100 dead bodies. These were the ones close to me. From my estimation, more than 300 people might have died as people came from other churches in all parts of the state, including government-sponsored praised singers with uniforms to attend the programme. For some of us that escaped, we only did by the special grace of God.’

Another student of the University of Uyo, Jennifer Thomas, told our correspondent that one of her friends, Blessing Linus, was trapped in the debris.

It was learnt that the iron used in holding the roofing sheet was twice heavier than the block used for the building. Security operatives cordoned the area and denied journalists access.

We only lost one person in the hospital except those that were brought dead. In circumstances like this, we have been overwhelmed. We need help from government.

Many victims are in private hospitals and mortuaries scattered all over Uyo metropolis; we can’t really tell how many people have died so far. We have over 200 persons in the mortuaries. We do not have space as people are still being brought in.’

We have done our best to revive some victims. Right now, we have over 50 cases we are attending to. This is the first time we are witnessing such an incident.

The state’s chapter of the Pentecostal Fellowship of Nigeria (PFN), in a statement by its Chairman, Dr. Sylvanus Ukafia, called on churches to hold special prayers for the church today (Sunday).

“All churches should take special offerings for the medical assistance of all those injured and send same to the Reigners’ Bible Church. Church members who can are also urged to donate blood, where necessary, to those in the hospital and make other donations as may be required in the course of the treatment of those injured,’’ the statement added.