America Has An ‘Awful Lot Of Cowards In The Church Today, General Jerry Boykin Says 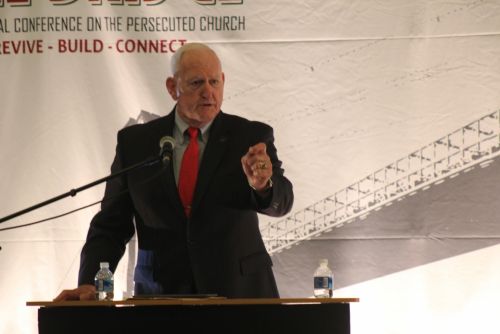 Giving a keynote speech at The Bridge –
International Christian Concern’s first annual
conference on the persecuted church – Boykin
warned that if the church wants to help Christians
that are being persecuted for their faith overseas,
Christians in the United States need to stop “conforming to the world.”

“The church is conforming to the world. We are
compromising on every issue — biblical standards.
We are compromising and conforming to the
world,” the former commander of the U.S. Army
Delta Force said. “That’s why it is ever worse for
these Christians that are being persecuted all over the world for living their faith. Because of, we, who
are supposed to be the most powerful nation.”

While there is constant debate about whether
America is a Christian nation, the former Deputy
Undersecretary of Defense for Intelligence and
ordained minister argued that the Constitution
“came directly out of the Bible.” Boykin added that
“every freedom that was matriculated has come out of biblical teaching.”

“And, we are conforming to this world and
destroying it,” he contended. “The church in
America is destroying our society because the
church is not standing strong and being the salt
and light that it is supposed to be and now, we are
losing our freedom. Society today in America wants us to believe in the ‘freedom of worship.’ What we
have is ‘freedom of religion.'”

Reflecting back on the shooting at the Family
Research Council headquarters in Washington D.C.
on Aug. 12, 2012, in which the gunman admittedly
targeted the office because of the organization’s
view on marriage and other issues and planned to kill as many as he could, Boykin proclaimed that the time has come for Christians to prepare to be the
“warriors of God’s kingdom.”

“What society is trying to tell us today is … ‘Keep it in
the church, keep it in the home but don’t bring it
into the public square.’ We are accepting it and
conforming to the world,” Boykin asserted. “It is
time for Christians to speak and rise up and be the
mighty army that God has called us to be.”

He cited Revelation 19 to explain that when Jesus
returns, He will return as a “fighting warrior.” He
then cited Exodus 15:3: “The Lord is a warrior. The
Lord is His name.”

“Don’t you think somewhere between Exodus 15:3
and Revelation 19 we are supposed to be warriors
in God’s kingdom. It’s time for us to rise up and be
what God called us to be — the warriors of His
kingdom,” Boykin stressed. “By the way, He did not
give His blood just you would go to Heaven. That’s a reward. All that is a little ribbon you get on the
end of the tour like the one I used to get on my
uniform. That is your end-of-the-tour reward. What
He called you for is to be the warriors of His
kingdom.”

By and large, the American church has “abdicated”
its duties and “fallen asleep,” and Boykin calls for
strong pastors and spiritual leaders to wake up and
take the charge.

Part of the problem, Boykin added, is that too many
pastors and leaders in America have caved under
the forces of societal pressure and have turned a
blind-eye to biblical teachings.

“If you go to Revelations, who are the first people
thrown into the lake of fire?” Boykin asked. “It’s
the cowards, and we got an awful lot of cowards in
the church today.”