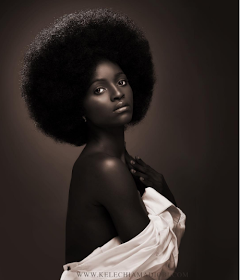 Just like TY Bello discovered Olajumoke on the set of a shoot with Tinie Tempah a couple of months back, photographer Kelechi Amadi-Obi has also discovered another diamond in the rough.

According to him, he saw Bukola after his shoot with Jidenna on Broad Street in Marina and when she came into the studio magic happened.

Read what he wrote after the cut, plus more photos…

This is Bukola . Some weeks back I was shooting @jidenna on Broad street Lagos and in between takes I saw her across the street selling pillows . Had to call her and give my number. ” if you’re interested in modeling please give me a call” I said. Well she came to the studio and I called my number one MUA @bimpeonakoya and this is what we came up with. I think she will make a great model. What do you think? #africanbeauty #diamondintherough