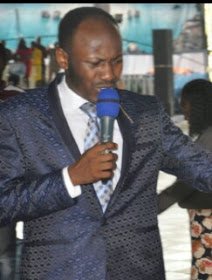 The General Overseer of the Auchi, Edo State based Omega Fire Ministry, Apostle (Dr.) Johnson Suleman, has warned President Muhammadu Buhari to restrace his steps as a leader or risk ending up a lonely man.

Suleman said this last week during the September edition of a monthly programme tagged International  Fire and Miracle Night which holds at the church headquarters every last Friday of the month. According to Suleman, “President Buhari risks ending up a loner unless he retraces his steps by redefining his style of leadership to have a human face.”

Suleman had, last year May at the inception of the Buhari government, warned that ” I see Buhari being stoned in his first six months as President.” In his message, Suleman asked President Buhari to use his office to glorify God rather than using it to punish Nigerians and harassing perceived enemies. “President Buhari should be very grateful to God. He should keep glorifying God for his miracle.

This is a man who contested severally for the office of President and lost. And when it pleased God, He gave it to him after a covenant Buhari made with him to turn around the lives of his people should he be given the chance to rule again. Why is he not honouring his covenant with God now?” said Suleman who spoke at the backdrop of the State Secret Service, DSS’ raid of homes and gestapo-like arrests of some top Nigerian judges recently.

“It has never been heard of,” stressed Suleman, adding that, “what Nigerians need at the moment is not another military-styled rulers but leaders who will assuage their anger and hunger.” Stretching his points, Suleman noted that breaking into judges’ homes without concrete proofs is the crudest tactics any government can apply on its citizens, particularly respected men and women who are the last hope of the common man.

The cleric wondered why the Buhari government that “didn’t say a word” when 50 Nigerian students were arrested in Turkey for alleged involvement in coup plot before their release few days ago,” was quick to “storm people’s homes at 1 am and breaking down their doors on baseless corruption allegations.” Suleman declared that what Buhari is doing by “not respecting the rule of law” is the greatest act of corruption.

“These are judges and there are laws that should be followed in operations like this. Did you write to invite them, did they refuse to honour the invitation? These are the first steps to follow. Besides, nothing warrants an alleged victim’s home to be raided at 1 am. So, I want to put it that Buhari’s government is corrupt because being corrupt is beyond just stealing public money; disobeying the rule of law is far a corrupt act than mismanaging money. You accuse someone of stealing, yet you are employing guerilla tactics to deal with the accused not following the Constitution, what then do we believe?

Also, an ECOWAS court said you should release Dasuki from prison, you refused to heed the ruling. Another court said, release Nnamdi Kanu, you also refused. Is Buhari greater than ECOWAS?

Here is a man who came into the presidential race without money, yet we read in the news how members of his family are wearing million Dollar wristwatches and kids attending best schools abroad. What corruption can be greater than that?

God has asked me to warn Buhari that Nigerians are angry and they are hungry. He should start working now to make Nigerians smile before it is too late.”