Apostle Suleman: I Know What It Feels To Be Poor Because I Tasted Poverty 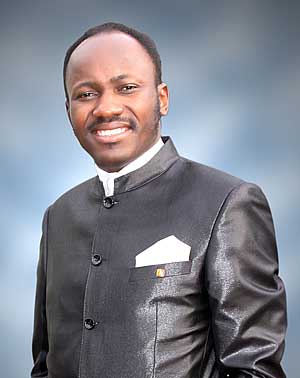 The General Overseer of Omega Fire Ministries Int’l, (OFM), Apostle Johnson Suleman, recently had the Onitsha Restoration Crusade in Anambra State. There was also the Tulsa, Oklahoma, United State edition, which came before the Anambra crusade. A charity agent, Suleman’s evangelistic mission, had taken the preacher to all the continents of the world.

At the OFM, people are witnesses to miracles. The ministry, headquarters in Auchi, Edo State, has 49 other branches across the world.
At a recent conference, there was the case of a man who was said to have had mental problem for eight years. He was alleged to have been chained to the crusade where the healing power of Jesus through Suleman allegedly healed him.

Also, there was this woman who was said to have come to share a testimony, but the spirit of prophecy allegedly took up her case and revealed to the apostle the real issues about her. According to the man of God, he realized right there that her destiny had been diverted. “She was compelled to join the police instead of her evangelistic ministry by her parents.

This gave the devil access to her and afflicted her mind. After this was revealed, she wept. Uncontrollably, agreed with the prophecy given and, ofcourse, hands were laid on her and she was whole and her mind was restored,”he said.

The latest from his milk of kindness was a donation of $7,000 he made to the New Day Youth And Family Services, Oklahoma during the Tulsa Raw Power Conference.

Making the donation, Suleman said at the Christ Chapel of Oral Roberts University, Oklihome where thousands from across the world gathered for the Raw Power Tulsa that it is on God’s instruction. “’God directs me to do these things which fire my compassion for men, pursuit for lost souls and mandate to wipe out tears and restore men and women to their destinies. My actions are of God”.

Apostle Suleman
Before the US crusade, the cleric charity activities targetted at different categories of people, from the obscure to celebrities. The preacher gave out nine classy cars worth each cash gift ranging between N100,000 and N250,000 to more than thirty people, while several members of the church got various gift items which include refrigerators, Plasma TV sets, power generators, gas cookers and other household needs. A comedian, popularly known as Filky, also got a new car, while a gospel musician Marvel Joks, received a new SUV from the man called God’s Oracle.

“I have tasted poverty. I come from a very humble background. My parents were Muslims before I was called. So, I know how it feel to be poor. That is why I believe that the less-privileged of today can become very important personalities tomorrow. My mission is all about preaching to souls and giving to the needy.

What I do every year in the open that you may think is big is just a fraction of what I do to help many in the corner”, said the man of God who noted that his giving in the public is not to show off but to show example to those who have but not give to start giving.
Suleman was already a successful businessman before he founded the ministry.

He is the chairman of Hosanna Conglomerate, with vast interests in real estate, oil & gas, banking, transport, print and broadcast media and publishing. Speaking on the source of his philanthiopy, Suleman said: “I give to people on instructions from God. The cash and cars I give to the less privileged, they are purchased with my personal money. I don’t take from the church purse because the church money cannot even sustain me. I have 106 widows that are paid 20, 000 monthly for the past four years and are given half a bag of rice each every Thursday.

Speaking of the Tulsa Raw Power conference, the man of God, who is scheduled to be Dallas, Texas, US on November 29, said: “It was indeed awesome. God manifested Himself in many miraculous ways. It is a written pact that works done in God’s way never lack positive supplies. God has always been wonderful. The conference was a