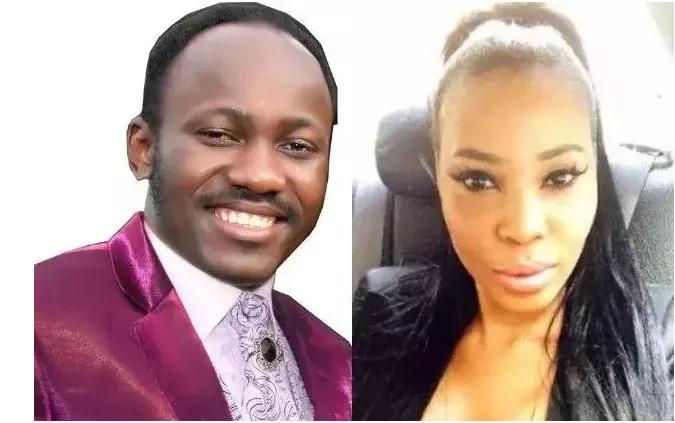 Stephanie Otobo, the alleged estranged lover of prominent pastor, Apostle Johnson Suleman of Omega Fire Ministry Worldwide, will remain at the Kirikiri Medium Security Prison for at least one more night, as the process of perfecting her bail conditions was slowed down on Tuesday, March 7, by bureaucratic problems.

According to a report on Sahara Reporters, Uche Moneke, a lawyer from Festus Keyamo’s chamber handling Otobo’s case, arrived at the Lagos state Magistrate Court in Tinubu at about 10am on Tuesday, March 7, to continue the process.

Apostle Suleman scandal: Stephanie Otobo to remain in Kirikiri prison
But at about 2 p.m, it became clear to him he would be unable to complete the process.

It was also gathered that an argument between some of the court officials and Moneke ensued and before the issue was sorted out, the Chief Magistrate, Justice Kikelomo Bukola Ayeye, whose signature was required for some of the documents needed for Ms. Otobo’s clearance, had closed for the day.

Thereafter, Moneke arranged to put a call through to Ms. Otobo to reassure her while he continues the process tomorrow.

But a senior warden who spoke on condition of anonymity gave assurances of Ms. Otobo’s safety in their custody.

Stephanie Otobo and one Wisdom Godstime were dragged before Justice Ayeye in an attempt to secure a remand warrant for the two, but the judge denied the application, stating there was no substantial evidence to deny them their freedom.

However, Justice Ayeye gave three bail conditions that are yet to be met.

Canadian based singer Stephanie Otobo had accused Apostle Suleman of getting her pregnant and dumping her afterwards.

The young lady was said to have contacted one of the best lawyers in Nigeria, Festus Keyamo, to assist her in filing a N500m lawsuit against Apostle Suleman.

In trying to prove his innocence, Apostle Suleman got the lady arrested and has been releasing all sorts comments on his social media handles which includes Snap chat and Twitter.

Suleman said there was never a relationship between himself and the singer.

He also denied being involved in the arrest and detention of Stephanie Otobo by the police on Friday, March 3.