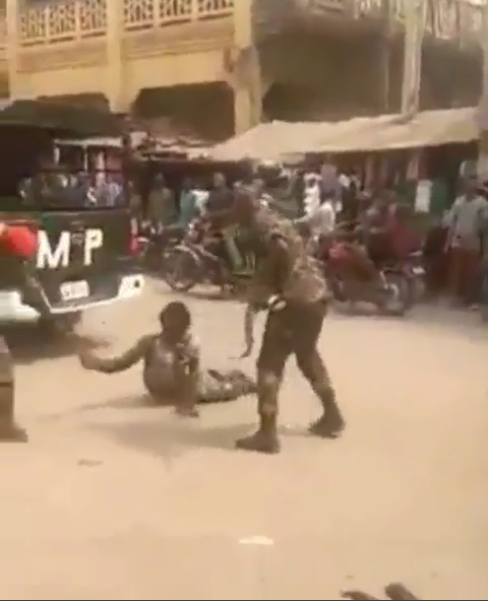 The Nigerian Army has said that it has arrested the soldiers that brutalised a physically challenged man in Onitsha.

A statement by Brig.-Gen. Sani Usman, Director, Army Public Relations, said that the two soldiers have been charge for assault by their Commanding Officer.

In a video that surfaced online yesterday, the two soldiers were seen dragging and hitting the physically challenged man with sticks after throwing away his wheelchair.

It was alleged that they beat him up for wearing a military camouflage.

In the statement titled: Soldiers that molested physically challenged person have been apprehended, the Army said:

The attention of the Nigerian Army has been drawn to a video clip in which two soldiers were seen maltreating a physically challenged person for allegedly wearing a camouflage shirt.

We wish to inform the public that the incident took place on Tuesday 7th February 2017, at Onitsha, Anambra State.

In line with our zero tolerance for acts of indiscipline and unprofessional conducts especially in relation to violation of human rights, we wish to further state that the soldiers involved have since been identified and apprehended.

They have also been charged for assault by their Commanding Officer.

Similarly, troops have been warned to desist from such acts that infringe on human rights and cast serious aspersions on the good image of the Nigerian Army.

The public should please regard this ugly incident as an isolated case which is not true reflection of the Nigerian Army.