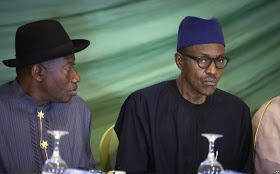 The Christian Association of Nigeria, Northern
Chapter, has released a statement asking President
Buhari to shelve any plans of arresting former
President Goodluck Jonathan as he continues in
his fight against corruption. In a statement signed
by the association’s Publicity Secretary, Rev. Joseph Hayab, the christian body stated that such
moves by the Buhari-led government will throw
Nigeria into confusion;

“Let me warn that such a misadventure will
set a wrong precedent and only open door
for mischief people to set this nation into
confusion. What Nigerians need urgently is
availability of fuel, electricity, prompt salary,
security of lives and property, among other issues that are begging for urgent answers.
If the purported plan to arrest him is to
please the international community and
prove to them that we are fighting
corruption, then let us know that this same
international community are busy celebrating him as hero of democracy and
even those who seriously wanted him to go
for a change to happen are now singing a
new song about him. Former President,
Jonathan is deservedly seen in Nigeria and
beyond as a hero of democracy because of his actions before, during and after the
2015 elections. As such, it will be an ill
advice for the Buhari administration to
initiate the arrest of such a statesman at this
time and with the current realities. Our
government must know that there are individuals serving today that are also been
accused of corruption but since there are
claims that nothing has been established
against them, they are walking and
speaking like saints. While ignoring all
these, Government now wants to arrest a man of peace like Jonathan? CAN Northern
States wishes to advice that such an action,
if actualized, has the capacity to lead to
serious confusion that will affect Nigeria
economically and otherwise. We believe
Former President Jonathan deserves praise and should receive gratitude from those in
power today not scorn. Let it not be that
this purported planned arrest is meant to
distract Nigerians from speaking or
complaining about the reality of what and
how they are feeling since the past eleven months, we are afraid that such an action
may spark a chain of reactions. If our
President wants to arrest anything for now
then he should arrest the incessant spate of
herdsmen attacks in Nigeria which has led
to the deaths of almost a thousand of innocent Nigerians under his watch. He
should arrest the dangerous slide in the
power sector.he should arrest the slide in
the economy. We believe at this time and
with the current realities that our former
president most not be denigrate but honour,

because honour must be given to
whom it is due.”