Summer signing Alexandre Lacazette couldn’t have wished for a better start to life in the premier league after scoring Arsenal and the premier league’s first goal of the 2017/18 season just 94 seconds into the game. Goals from Shinji Okazaki and Jamie Vardy, however, silenced the Emirates in an incredible season opener.

Danny Welbeck scored an equaliser right on half-time to put the game on 2-2 before the break.

Leicester took the lead again when Vardy headed in Riyad Mahrez’s corner before Arsene Wenger made an inspired double substitution which sparked Arsenal’s comeback.The Gunners boss introduced super-subs Aaron Ramsey and Oliver Giroud after 67 minutes and within 20 minutes both players had scored as Arsenal incredibly turned defeat into victory with 7 minutes left to full-time.

*Haven’t picked your favourite to win the Premier league this season? Predictions are ongoing. 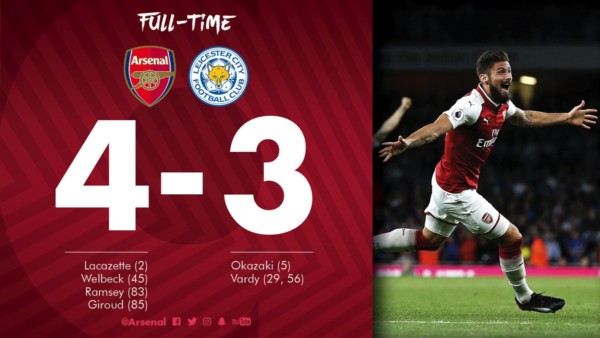