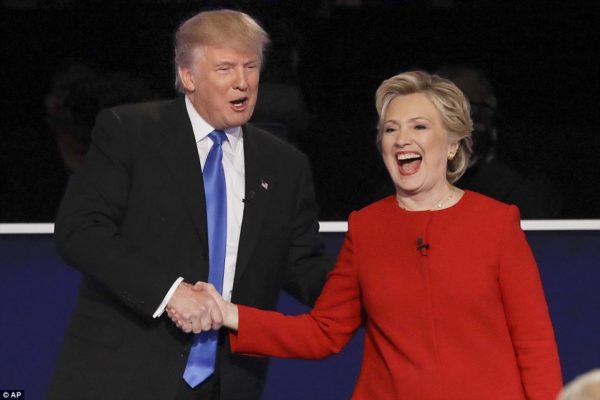 Donald Trump and Hillary Clinton have made renewed attacks on each other’s fitness for office as polls suggest the race for the White House is tightening.

Clinton – who has seen her national opinion poll lead shrink in recent days – targeted her Republican rival’s temperament and attitude to women.

Trump claimed she would be followed into the White House by criminal investigations.

He was boosted by a rare campaign appearance by his wife Melania.

In her first speech since July’s Republican convention, the former model spoke about being an immigrant and a mother and said her husband would “make America fair”.

She also vowed, in a speech in the Philadelphia suburbs, to lead a campaign against cyber-bullying if she becomes first lady, and to combat a culture that has “gotten too mean and too rough”.

She made no reference to her husband’s record of name-calling on social media.

Trump has gained ground on Clinton in a number of swing states, such as Florida and North Carolina, according to polls.

Some national tracker polls are now suggesting the two candidates are neck-and-neck.

The Reuters/Ipsos States of the Nation project estimates Clinton’s odds of winning the necessary 270 Electoral College votes on Tuesday at about 90%, down from 95% last week.

The momentum appears to be with Trump, who has joked about having to stay on message, as the final weekend of campaigning approaches.

He has capitalised on a new FBI investigation into a Clinton aide’s emails.

“Here we go again with the Clintons – you remember the impeachment and the problems,” Trump said at a rally in Jacksonville, Florida, his fourth appearance in the state.

“That’s not what we need in our country, folks. We need someone who is ready to go to work.”

Later, at a night-time rally in North Carolina, he delivered a speech on defence in which he said he could not imagine Clinton as commander-in-chief.

Clinton continued to focus on Trump’s character, telling a rally in North Carolina: “He has spent this entire campaign offering a dog whistle to his most hateful supporters.

“This has never happened to a nominee of a major party.”