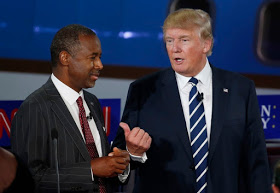 Dr. Ben Carson is reportedly considering accepting an offer to serve as Department of Housing and Urban Development secretary in President-elect Donald Trump’s administration. The retired Neurosurgeon who previously reportedly rejected an offer from Donald Trump due to his ‘lack of political experience’, said Wednesday night in an interview with Fox News, that “the offer is on the table” and that he is seriously considering it because he grew up in Detroit and knows that the inner cities are in shamble and need to be taken care of.

“We did in fact have a discussion of what things need to be done in the country and what the options were,” he said.

Ben Carson’s spokesman Armstrong Williams had said last week, that Carson wouldn’t accept any government position. He said that in an effort to quash speculation that Carson would accept a Trump administration Cabinet role “or any position in the administration.”  But Carson told Fox News on Wednesday that Williams was “talking off the cuff.”

Trump tweeted on Tuesday morning that he was considering Carson to lead the HUD. He tweeted: 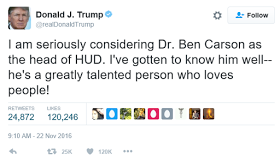 As secretary, Carson would lead the office that oversees affordable housing, fair housing laws, funding for development projects, initiatives to address homelessness and other related programs. He doesn’t have any experience with housing policy or development but in an interview with Fox News  Tuesday, he cited growing up in Detroit as a qualification for the HUD secretary role.

“I grew up in the inner city and have spent a lot of time there, and have dealt with a lot of patients from that area and recognize that we cannot have a strong nation if we have weak inner cities,” he said.

Ben Carson said there are other positions that have been offered to him and he will consider them and see what position he will be more effective in serving in. He added that his decision could be expected “in the next few days.”