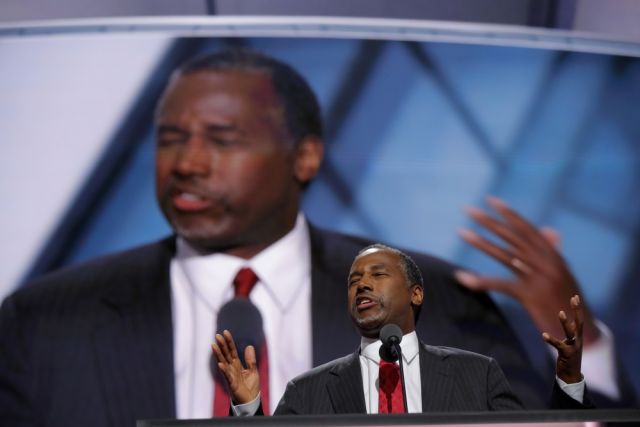 Dr. Ben Carson is saying that Donald Trump “absolutely” prayed for forgiveness Sunday morning, before he went on stage to debate Hillary Clinton that night.

According to Yahoo News reports, Carson told journalists that Trump prayed with televangelist James Robison, who founded LIFE Outreach International, a Christian relief organization, and that Trump had “absolutely” asked for forgiveness in those prayers.

When pressed for further details about the content of those prayers, Carson replied that Trump “is coming ever closer to the Lord.”

Carson’s statement that Trump had indeed asked for forgiveness is notable given Trump’s past assertions that he is a Christian but never asked God for forgiveness, a nonsensical statement for many Christians. Such irreligious remarks were equally puzzling for many secular observers who wondered how an unrepentant man was garnering significant evangelical support.

Carson did not defend Trump’s comments but argued he was still a better alternative to the Democratic nominee. Progressives and the political elites, he said, pose a greater threat.

“Those of us who do not want to see America fundamentally devolve into something worse must be wise enough to recognize the scheme that is being played out here,” Carson opined in a Fridaypiece in the Independent Journal Review. “We must demand not only that the issues be discussed but also that we make our decisions based on issues and not on personalities or decade old statements and behavior by Hillary Clinton or Donald Trump.”

As for the man with whom Trump prayed, unlike Carson, Robison has not formally endorsed Trump. In a June 23article for The Stream, Robison explained that he joined the Republican candidate’s Evangelical Council, not for the prestige of it, but to give counsel to any political leader who would receive his advice.

“Whether it was Joseph counseling Pharaoh, Daniel counseling Nebuchadnezzar, Nathan calling King David to account, Samuel speaking prophetically to King Saul, the Apostle Paul in chains before King Agrippa, or countless other biblical instances. God calls his followers as ambassadors for Christ to engage, at times personally and directly, with secular leaders — including the godly, the wicked and others who may or may not find their way to the heart of their Creator,” Robison wrote.