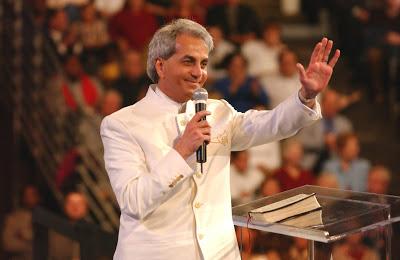 Popular American televangelist, Reverend Benny Hinn has hailed Nigerian clergymen for the huge works they have been able to do in the country over the years.

The man of God who has been in the country for the 2016 Jubilee Word Festival, held at the International Gospel Centre, expressed his delight at seeing the churches in the country grow under the tutelage of the various ministers of God in the country.

Below is the excerpt from the interview:

How do you describe your visit to Nigeria this time around?

I have been to Nigeria now four times. The first was with Benson Idahosa back in the 80s, one other time here in Warri and I also came to do a crusade in Lagos in 2005. Lagos was tough because things were not done well at that time; but I have told my staff that I was stunned by the different atmosphere in Nigeria today.

When we were here in the 80s, Benson took me to several places like Lagos, Kaduna, Ibadan, Benin, among others, where we had meetings. It was tough.

The people were not as receptive in those days; in one of the places, they actually chased us and we had to run away with the crowd running after us and we had jump over the fence running for our lives. That was back then.

But, today, what I saw in Lagos at Pastor Chris’s church, I was stunned with how powerful the anointing was and how strong the people received it. I am still kind of in shock because I have this kind of images of what we saw back then. With that and we came to see this wonderful reception, I am left with the impression that these are different people and a different nation. I see much more elegance especially in Lagos. It’s really a different world here. I have no doubt that the Nigerian people are being used to trigger the revival worldwide and it’s quite amazing that most major churches in the world today are pastored by Nigerians.

A lot of these men who began ministries that time and other men I met through Benson Idahosa in Kaduna, particularly Bishop David Oyedepo, who was our host in Kaduna, and the General Overseer of the Redeemed Christian Church of God, Pastor Enoch Adeboye, now have big churches across the globe.

Adeboye’s church in London which Pastor Andrew, who is like a friend to me, heads, is doing great things. The spirit of excellence is quite stunning and I am discovering more and more about Nigerian churches everywhere I go. When we had the pastors conference in June this year, there were pastors from Nigeria and, to my shock, they were telling me they had opened churches in Dallas, Texas, New York, Miami and all over America.

It’s like Nigerians are taking over the world. Thank you Jesus. It’s a very remarkable thing because the biggest churches in the world today are run by Nigerian pastors. They are springing out of the Benson Idahosa Movement – Adeboye, Oyedepo, Oyakhilome and several others – in Europe and I am amazed. They are springing up everywhere.

I don’t know what it is about your people but it is very stunning really. The first time I came it was very tough but, this time, I am blown away by the class, the excellence and the prosperity I see here. Benson Idahosa used to tell me, ‘you preach prosperity, we live it’, and I think it’s true. It’s really exciting! You are a blessed people.

You came from Lagos to Warri and you’re going to Abuja from here. What’s the prophetic word God has asked you to tell this nation as we prepare to enter 2017?

I tell you what the Lord is saying. There’s a brand new generation of people, like in Lagos, when I called the young people to come out, I was stunned. More than half the crowd were young people and, when the power of God hit them, it was like thunderbolt. They were so receptive and just like here in Warri where young people are very dynamic and hungry for the Word of God. I don’t see that very often in many places. I can say here that the Nigerian young people really want the Holy Spirit.

You know that in many places, the Holy Spirit has become unknown, and in some places, sadly, unwanted but not here in Nigeria. Here, they just hit it up. Last night meeting, I thought my skin was going to blow off. The first night, with about 6,000 pastors, when Sinach began to sing, I began to weep and when a young man called Martin began to sing about the Holy Spirit, I began to weep again. Dynamic anointing and I am thinking, where did this anointing come from? Elegant, anointed, dynamic. It’s not the Nigeria I knew of. So, what I think, prophetically, this new generation will soon shake the world. I am not saying it to impress you, I just see it because…maybe it’s happening in Ghana, Cameroun and other parts of Africa but I have not been there to see it. But I see it here. I think the big churches all over the world are not people from other African nations, and that is a testimony.

Nigeria today has been transformed, I believe, because of the fact that you’ve had mighty crusades here over the years…Benson spearheaded, several years ago, a great move of God here and later Rheihard Bonnke spent so much of his time here and others followed up with the masses that come to their meetings. The land is really ready for the revival and with a Christian TV like the African Broadcasting Network clouds unend.

You really can’t have a revival without Christian TV because Christian TV makes the ground soft for the gospel and for the seed of the Word. So we really need Christian TV because, without it, the land will not be soft. My prayer is that Nigeria should be saved from coast to coast and become a light house to Africa and the world because it’s already getting prepared to shake the world. You have a blessed government, and I am hearing so many good things about Nigeria and what’s happening here with your economy.

The future is very bright for your country. I am seeing it. When I came earlier and met with then President Olusegun Obasanjo and Pastor Ayo Oritsejafor, we talked so intimately about your economy and, today, when we flew out of Lagos, I could see several new high rise buildings, new hotels. It’s really a bright tomorrow and Christian TV is a major instrument that God uses to prepare for a revival.