Benny Hinn: I Honestly Can Not Believe I’m Still Getting Away With This 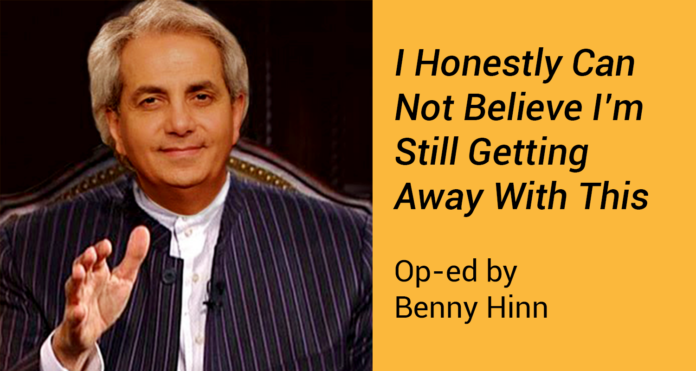 The older I get, the more I realize how lucky I’ve
been in life.

It was 1983 when I first started claiming to be a
special vessel of the healing power of God
Almighty. That’s right, more than thirty years—
think of it now, thirty years!—of “Benny Hinn
Miracle Crusades.” I’ve been to so many countries,
performed so many times, and made so much money, that sometimes it seems like this has all
been a dream.

As I look back at all I’ve accomplished in my life,
there’s one thought that keeps popping up in my
mind—I honestly can not believe I’m still getting
away with this.

I’m 64 years old now—twice the age I was when I
first started whipping people into an emotional
frenzy in order to make them believe, in their manic
state, that God would heal and bless them if they
gave me money; indeed, that when I touched them,
that they had been touched by God Himself. And believe it they did. How could anyone blame them?
These were desperate people. That’s who I go after
—the desperate ones. Why do you think I have so
many healing crusades in third-world countries?
These are poor, desperate people.

But I’ve learned something about poor, desperate
people: even though they have very little, what little
they have can be taken away. Don’t believe me? I’m
worth eight figures, brethren. As they say, numbers
don’t lie.

Can you believe I’m still getting away with this?
Honestly.

Just picture something with me, will you? I’m
exorbitantly wealthy, and exorbitantly wealthy me
likes to put on “Healing Miracle Crusades” in dirt
poor, third world countries, where the people have
absolutely nothing. So I set something up, and rich
Benny flies into some godforsaken, poverty- stricken region full of poor people, in my own
private jet, hauling Louis Vuitton suitcases full of $
5000 suits and $1500 shoes. Just smelling like
money. And what happens next? Do I help these
poor, desperate fools by giving them some of my
riches?

No. These people give me money. THEY give money
to ME!

All I have to do is tell them their diseases will be
healed, their crops will grow, their goats won’t die,
and their kids won’t starve—as long as they give
me money. I tell them that they might even become
rich like me one day. And how do I justify these
words? Easy—I say it’s all in the Bible. Then I bring a few of them up on stage and whack them with
my suit coat—which is worth more than any twenty
of them—and watch them wiggle around on the
floor like fish out of water. They get worked up into
such an emotional frenzy that I could tell them to
jump off a building and they’d do it.

That’s all there is to it. They flock to me. You should
see them cough up everything they have. Then I
just fly away in my jet. And I do all of this in the
name of Jesus!

I’ve been doing this for more than thirty years now,
beloved. Prostituting the word of God, betraying
God Himself, robbing the poorest of the poor,
leading countless—and I do mean countless—
people astray, away from God, away from the truth.
All for money. All to get rich.

It’s working, is it not?

When I started this racket, so many years ago, I
imagined getting a solid five or six years out of it
before reality hit and I was shut down. I figured it
was worth a try, and worth the risk. But here I am
now, all these years later, and wow—still flying
around the world, multiplying my net worth on the backs of a new generation of desperate people.

Honestly. I can not believe I’m still getting away
with this.