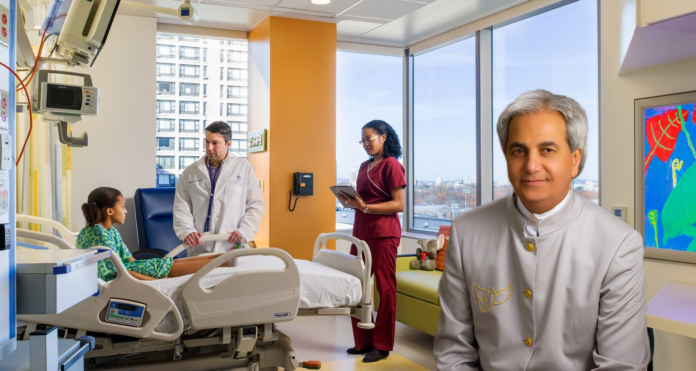 ORANGE, CA—Most pastors are content to be
simple, faithful preachers of God’s Word, and so
was Benny Hinn—until he realized, years ago, that
God had given him supernatural powers to
instantaneously heal the sick and dying. Since the
day of that revelation he’s been putting his powers to use by spending his days healing those who
need it most—usually with minimal sleep and food
himself.

“There is too much work to be done,” he says.

On this particular Tuesday he was spotted healing
terminally ill kids, as he is known to do, at the
Children’s Hospital of Orange County.

It was a typical day’s work at the hospital for Hinn,
which includes healing hundreds of patients with a
mere touch or a softly spoken word, song, or
prayer. He refuses all gifts, donations, and “love
offerings,” of course, and gently turns down all
photo op attempts and autograph requests. Passing by him, you wouldn’t even know he was
any different from the rest of the hospital staff, as
he typically dons scrubs, booties, and a surgical
cap in order to blend in and avoid attracting any
unwanted attention.

Hinn goes about his work quietly and
methodically, and by the end of the day, every
single child in the hospital has been cured of their
various maladies, parents, doctors, and nurses
have been reduced to tears, and Benny Hinn is
slipping off quietly to his small home in Dana Point to plan the next day’s work.

“It’s absolutely unbelievable, what Benny has
done for our patients—well, our former patients,”
teary-eyed surgeon Dr. Todd Gallimore laughed
to reporters after the day full of miracles. “Benny
Hinn is true man of God. A true man of God.”

The normally press-shy Hinn offered a quick
statement to reporters after being told of Dr.
Gallimore’s kind words. “I’m just doing what
anyone else, in my shoes, with my powers, would
do. It would be quite wretched of me to do
otherwise, would it not?”

“Please tell Todd I said thanks,” he smiled.

And then he was gone.