Billy Graham: When Jesus Returns All Wars Will End, Christians Will Have Complete Peace 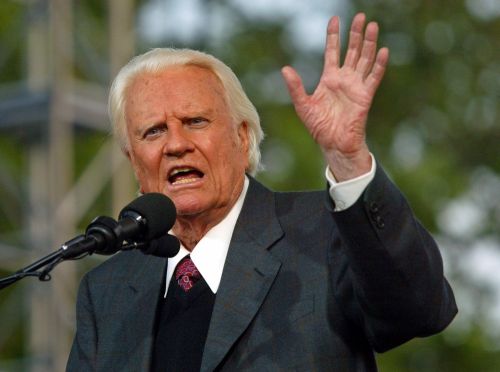 One day, all wars will end and the world will
achieve great peace, the Rev. Billy Graham says.

In response to a question submitted to the Billy Graham Evangelistic Association, the evangelical leader explains when Jesus Christ
returns for the Second Coming, all destruction,
war and death will cease to exist and His
followers will be rewarded with eternal peace.

The questioner asked: Do you think the world
will ever be at peace, and we won’t need
armies or weapons ever again? I get very
depressed reading about all the wars that still
go on, and I wonder if they’ll ever end.

Graham answers by emphasizing that “Conflicts
and wars have raged almost since the
beginning, when Cain killed his brother Abel
(see Genesis 4). Even in our own time, terrorism
and open warfare threaten many parts of the
world.”

Citing Matthew 24:6-7, Graham says conflicts
and wars will be ongoing until Jesus’ return.

“You will hear of wars and rumors of wars. …
Nation will rise against nation, and kingdom
against kingdom,” the verses read.

Graham adds that “The problem isn’t just
economic inequality, or racial conflict, or social
injustice — although these are certainly serious
issues. The problem is deeper than these,
however — because the basic problem is
within our own hearts and minds.

“Would wars happen if we weren’t greedy, or
power-hungry, or filled with envy and hate?
This is why we need Christ, because only He
can change our hearts and fill us with true
peace and love. Have you opened your life to
His transforming power?”

But there is hope for Christians, Graham says,
because “some day all wars will cease — when
Christ comes again!”

“He alone gives us hope for lasting peace — in
our hearts, and in our world,” the evangelical
leader concludes.

In observation of Memorial Day this past
Monday, Russell Moore, the president of the
Southern Baptist Convention’s Ethics &
Religious Liberty Commission, reflected on the
impact that war has on people’s lives, explaining that some Christians feel conflicted about honoring soldiers who fought and died
in wars when Jesus taught peace.

Moore wrote in his blog that while the Bible
discusses the concept of “just war,” it also
notes the importance of “turning the other
cheek” and “loving your neighbors,” as
communicated through the Sermon on the
Mount.

But maintaining complete pacificism in the
modern world is unrealistic and “utopian,”
Moore said.

“A Christian whose first response to news of
unrest or persecution overseas is, ‘Just nuke
them’ is also speaking outside the way of
Christ. Yes, military action is sometimes
necessary. But Christians have always seen war
of any kind as a tragedy — even when it is the least bad of the alternatives before us,” Moore
wrote in his Memorial Day post, as reported by The Christian Post.

“Christians also recognize that a concept of
‘perpetual war for perpetual peace’ is an
illusion. Jesus rebuked Peter for believing the
answer to Jesus’ arrest was the declaration of a
violent counter-action, (Matthew 26:52). Sure,
there will be a ‘war to end all wars,’ but it will be fought at Armageddon — and it won’t be
planned by the Pentagon,” Moore adds.