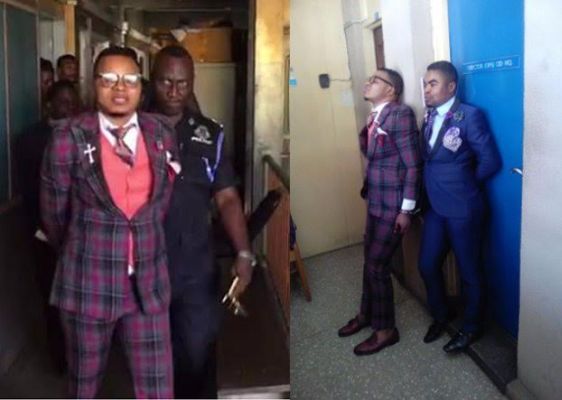 Controversial founder of the International God’s
Way Church, Bishop Daniel Obinim was escorted in
handcuffs and transferred to the Accra Police
Headquarters after he reported himself to Tema
Regional police station earlier today.

The ‘Angel of God’ had responded to invitation
following complaints made to the police after he
publicly flogged two teenage members of his
church for alleged fornication and attempted
abortion. 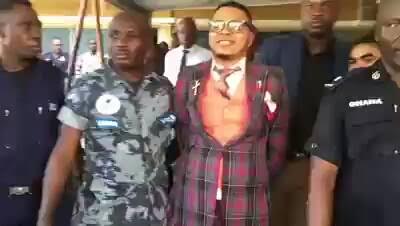 The police had given him 24 hour ultimatum to
honour their invitation or they will be forced to
take action against him.

A video of the man of God flogging the two with a
belt went viral on social media recently, drawing
widespread criticism but the Bishop defended the
action insisting they deserved it for engaging in
fornication and attempting an abortion. 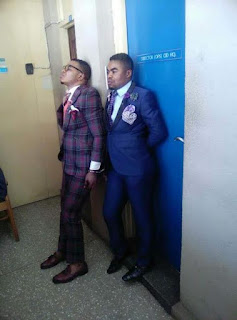 However, there is a twist…according to Ghana
media, the controversial Preacher is also being
interrogated over a GH¢11.6 million fraud case.
The Criminal Investigation Department (CID) PRO,
ASP Joseph Darkwa, said a complainant came to
the Tema Police some few weeks ago to report that he gave an amount of GH¢780,000 to Okomfo
Gyapata of Mampong Nkwanta near Koforidua in
the Eastern Region to do a spiritual ritual to bless
the money.

“According to the complainant, after some time, he
realised that the Okomfo was not able to help him
neither was he able to give him back his money,
so he came to Bishop Obinim to report the matter
so the Bishop would help him retrieve the money
and do the rituals to bless the money for him,” he said.

ASP Darkwa said it was based on that that Bishop
Obinim asked him to bring the rest of the gold
money which amounted to GH¢11.6 million
belonging to the family.
The complaint told the police since he gave the
money to the Bishop, he has not been able to do what he was expected to do neither was he given
his money.

The complainant said he gave the money to
Okomfo Gyapata on November 28, 2015, but the
money he gave to Bishop Obinim was in June this
year.

The CID PRO told Joy News’ Dzifa Bampoh on
Newsnite that the complainant has not lodged a
complaint against Okomfo Gyapata as yet but if it
becomes necessary that they have to involve him
they would do so.

“We have just commerce investigation into this
issue, when we finish we will hand him over to
Domestic Violence Victims Support Unit (DOVVSU)
to investigate the domestic violence issue,” ASP
Darkwa said.

The congression waiting for him to lead service at
the Tema Community 9 branch were disappointed
as the junior pastors throng the police station and
they registered their disappointment upon seeing
him handcuffed into a police car to be transferred
to Accra, Joy News reports.

Watch video of his arrest below: