Bishop Eddie Long Reveals He Has Lost More Weight, Assures Congregation He Will Be Back In Pulpit 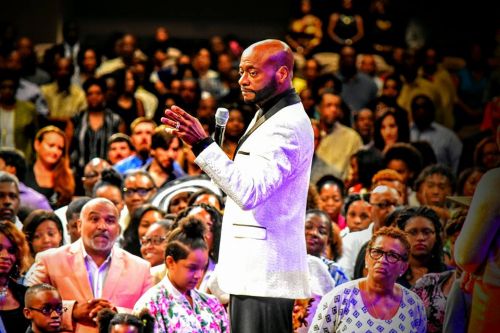 Despite being on what he calls a “sabbatical” recovering from an unspecified “health challenge,”controversial megachurch pastor Bishop Eddie Long joined his followers on a prayer call this week
in which he revealed he has lost more weight and
assured them he will be back in the pulpit next month.

“My wife was telling me that I need to rest and I. said I can’t till I do this, I know my folk need to hear me. I want them to hear me and I have things in my spirit…I’ve been away too long,” said the 63-year-
old Long who leads New Birth Missionary Baptist Church in Lithonia, Georgia in explaining why he decided to join the prayer call.

The controversial televangelist turned heads in August when he revealed an emaciated figure he claimed was the result of a new vegan diet.

After reports surfaced two weeks ago that he was hospitalized with a grave illness some speculated
was cancer, Long admitted in a statement to The Christian Post that he was sidelined from his church by the unspecified “health challenge” from which he is trusting God to deliver him from.

“I am recovering from a health challenge that I trust
God to deliver me from. It is unrelated to the eating
for life diet consisting of mostly raw vegetables that
I am continuing, as part of a holistic approach to
good health,” he said in the statement.

In a recording of the prayer call acquired by The
Christian Post that took place on Wednesday
morning, Long told his followers that this is the
longest period he has ever been away from his
congregation and assured them of his return in
October.

“This is the longest kind of sabbatical I have taken
from New Birth in almost 30 years. It was one much
needed. Should have been doing it but I also know
how much I miss my congregation and how much
they miss me. And just sometimes I get a text
saying Bishop I need to hear your voice,” Long told his followers.

“I’ll be back the 1st of October. Back in that pulpit looking forward to being with you and sharing again. A little lighter but much stronger in the name
of Jesus,” he added.

Prior to Long speaking on the call, he was preceded
by Bishop Stephen Davis of New Birth Birmingham
who delivered an exhortation of the need for good
shepherds in the church. He also raised concern
about sheep being concerned when they think
they don’t have a shepherd or leader.

“And there’s a couple of things that happen when
the people feel weary and scattered or feel like they
don’t have a shepherd. Just in their hearts, they are
not sure. They’re not sure if I’m gonna maintain
what God has given me. Well I came to tell you,
because you have a shepherd because you are hearing his voice even on this call this morning…my
father, my apostle, my bishop’s voice,” said Davis
with assurance.

“It just brought so much comfort to me that
whatever has been accomplished is going to be
sustained. While the enemy likes to come in
regardless of whether we see healing, breakthrough, finances, he likes to come in and steal, he’s a thief, we all know according to John 10:10, he is a thief. So we understand that the enemy wants whatever he’s achieved. He wants to
take it back. But because you have a shepherd,
because you’re hearing our Apostle’s voice
because you are hearing the voice of your pastor,
your spiritual leader, in that local church, you are going to be sustained,” he said.

Long also revealed that despite his “health
challenge” he went to church on Tuesday to do
recordings for an inspirational CD which he said
was for his followers to be able to hear his voice.

“Yesterday bishop, I went to church, I’m supposed
to stay away from church, I went to church and I
did a CD, an inspirational prayer CD because I
realize my people that God has assigned me to
serve…need to hear my voice,” he said.