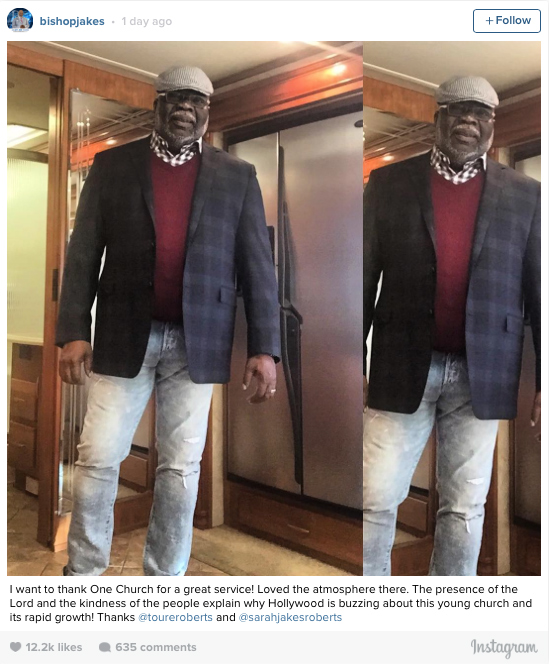 Church leaders are supposed to set good examples to their flock, and Bishop Teddy Jakes has been known for that. But just like any other human, at times he does things that don’t go down well with some of his followers or critics; and they never fail to point them out.

In an Instagram post, the bishop sent out a message to One Church in Hollywood, thanking it for the spiritual atmosphere it offered him when he attended a session there last Sunday.

In his post, he said: “I want to thank One Church for a great service! Loved the atmosphere there. The presence of the Lord and the kindness of people explain why Hollywood is buzzing about this young church and it’s rapid growth.”

Jakes may have not known what was awaiting him after posting the message and including a picture of him wearing ripped jeans. That picture didn’t go down well with some of his followers.

“Too Old for jeans w/ Rips and Tears! Aren’t you suppose[d] to be setting an example for your flock? No better way to show them huh…”

It appears Jakes hasn’t seen any Bible verse that forbids church leaders from wearing ripped jeans. So, he decided to ask his follower who criticized his attire to show him which Bible verse he relied on to make such a comment.

“Scripture please? I certainly want to comply with the word. I just missed the one about jeans in the pulpit.” – responded Jakes.

Another The Old Black Church user defended Jakes, saying the bishop is just a human being with weaknesses.

“You see, people should stop expecting so much from these folk. They are imperfect humans. Him just like the rest pull their pants up one leg at a time. Geeeeees!” – the user defended Jakes on The Old Black Church website.

Some other critics also fiercely criticized Jakes on IG, saying the attire isn’t appropriate for his age.

“The jeans are not age appropriate,” one  critic stated. “End of story. Has nothing to do with him being a minister. If my dad wore these jeans, I would be mortified. There are plenty of styles out there that would be more flattering on the Bishop.”

Isn’t it appropriate to give God our best? One user argued that were Jakes going for a job interview, he would have dressed more decently.
Lol. Ppl sha…