Black Lives Matter in Naija Too!  An article  By Tony Ogunlowo 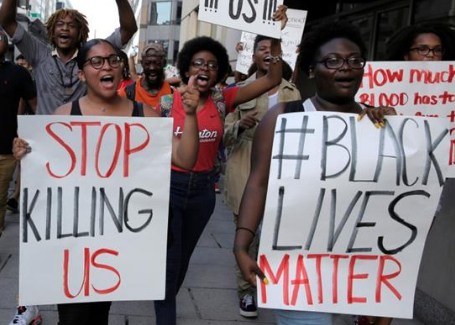 Recently there has been an international uproar at the number of black people being shot dead by the police in America. The situation has become so bad that an organisation called ‘Black Lives Matter’ has been set up to draw awareness to the problem. Endorsed by a number of top black American celebrities the group is working hard to prevent further extra-judicial killings through peaceful protests.

Far away from the shores of America, and the attention of the world media, the same thing is happening in Nigeria too: trigger-happy policemen – mostly SARS operatives – are shooting and killing innocent people on a daily basis. In most recent months well-documented cases of extra-judiciary killings by the police include:

·         Two workers were shot dead by the police at a rally in Nasarawa state in July.

·         In September, the blogger Chukwuebuka  Isidore, better known as Ghostmode, was shot dead by the police in Port Harcourt.

These are just a few cases that are documented and mentioned in the press, many others go unreported with only the families of the deceased knowing they’ve lost a loved one. Sadly there is no justice for the victims or their families as the guilty police officers are very rarely reprimanded. There will be no inquiry; no court trial and most offending officers are back on the streets within hours.

Most notorious for extra-judiciary killings is SARS – the Special Anti-Robbery police Squad – set-up to combat violent crime. Adequate firearms training is not given to police officers who carry guns and further psychological tests would reveal that a great many of them are not mentally fit to be in possession of a firearm – there are even unconfirmed reports that many of them operate under the influence of drugs and alcohol.

In other countries extra-judiciary killings by the police are taken very seriously but not in Nigeria where their superiors tend to turn a blind eye.

How can people have faith in the police when they know they’re likely to be shot dead for refusing to give a trigger-happy policeman a bribe? And the police, themselves, knowing they’ll never be prosecuted will carry on killing innocent civilians. And it’s not just shooting people they’re guilty of; because they wear a uniform they seem it fit to beat innocent people to a pulp, punishing others – kicking, punching and torturing – in ways one would not expect a police officer to behave.

A recent Amnesty International report entitled: ‘Nigeria: You have signed your death warrant’ points out that the Special Anti-Robbery Squad(SARS) are ‘…subjecting people to horrific torture methods including hanging, starvation, beatings, shootings and mock executions..’ whilst at the same time getting rich by extorting bribes. Armed with guns they become a law unto themselves and use their weapons with impunity. The question on everybody’s lips is how long are they going to go on killing innocent people before the government steps in to do something about it.

The police in their defence will probably argue that there are a lot of armed hardened criminals out there that need to be dealt with properly hence the reason to use lethal force and weapons. This understandable if they’re dealing with armed robbers but not unarmed civilians. If they can’t shoot straight, and are always hitting bystanders, they should be taught how to and if they can’t see properly perhaps they need to take eye tests – there is a big difference between an armed and unarmed person!

But yet again the Nigerian Police are well known for their legendary use of excessive force (- and abuse) when dealing with anyone they deem to be a suspect.

Everybody is innocent until proven guilty and killing people at random doesn’t constitute justice – it’s an unlawful killing whichever way you want to look at it. Armed police should be trained to use their weapons wisely – returning fire only when fired upon is understandable but shooting – dead – unarmed civilians is not tolerable behaviour in a supposedly civilized society. Beating up people for minor misdemeanours or refusal to give bribes is not also acceptable behaviour.

Most Nigerians support and follow #blacklivesmatter in America, condemning the deaths of innocent black people over there, but what about what’s happening on your own doorsteps? They do say charity begins at home. Perhaps it’s time to start a new movement in Nigeria – #blacklivesmatterinnaijatoo!