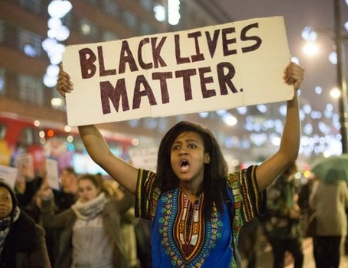 A terrible and aggravating scene once again played out this past week in Tulsa, Oklahoma where
another black man, Terrence Crutcher, was shot and killed by a white police officer, Betty Shelby.

The unfolding events leading to the killing of Terence Crutcher captured live by webcam and police helicopter videos showed an unarmed black man with his hands raised walking away with slow
unsure steps from the police woman who had pulled and pointed her gun at him.

The reports are that Terrence Crutcher’s car had been parked in the middle of the road, when the
police woman, responding to another call about domestic violence spotted it. The details are
sketchy, but suggest that she had wheeled round soon after the call, and accosted Crutcher to move his vehicle out of the road. The “big, black man” stayed silent, was apparently terrified about the
nervous policewoman who most likely issued a series of orders to which this black man, apparently
responded in what he considered the most unthreatening and safest of ways.

He raised his hands, turned his back, and walked slowly to his car not uttering a word either in
response or in self-defence. This is the dilemma of blackness today in America: black children are told
to show their hands whenever they are stopped by the police, particularly white police officers; to keep their hands on the wheel if they are driving, not move it, and remain in the car, and to not talk back.

Terrence Crutcher may have been following these standard rules. He stayed silent. He raised his hand,
and turned and walked slowly to his car, apparently in order not to feel “threatening” to a police officer; particularly a white police woman.
Yet, his silence and mere presence threatened this police woman.

Crutcher was in that moment in a lose-lose situation. If he talked back, he would get shot. If he
stayed silent he would get shot. He was black and
therefore dangerous. What is not clear is why his suv was parked in the middle of the road. Cars do
break down. Did his car break down? Was he in need of help to move it? There was clear evidence
that he had wound up the glass of his door, and was clearly out of the car. The most rational
conclusion was that he was a man in need of help with a car that had broken down. What happened
next is increasingly familiar.

A CNN report with a footage of the events showed this single black man alone quickly surrounded by
a battery of white police men who had all pulled a gun, all crouching in the manner of hunters around
a wild and dangerous animal, and they were all clearly ready to do harm.

And it is clear that what they saw at that moment was not another human being – but a dangerous
beast – whose mere presence, even with his hands raised felt threatening. This fact is made clear from the recorded voice of the police Helicopter patrol hovering above, recording the event.

The voice said, “this man is not obeying commands,” and described him as “a big, bad
dude.” This is the distant voice of a white police officer observing from the sky. To him, the big,
black man was a “big, bad dude.” He had not met Terrence Crutcher, whom his twin sister later described as “a brother,” “a father” and “enrolled in Community College, to make us all proud” in
touching tribute. Yet from that far removed space,
all what the white police surveillant could see was
“a big, bad dude.”

This big black man, apparently alone, unarmed, frightened and surrounded by a pose of armed
white police officers got to his car, and was first tasered by another police man, and then shot by
Ms. Betty Shelby, whose husband, ironically was recording the entire absurd theatre from the police helicopter.

In the footage released by the police and showed
by CNN, we could only see Terrence Crutcher drop
down dead. For more than two minutes he was left
on the ground. No emergency medical attention
was given to him. It was to satisfy that he was truly
dead that medical attention was paid him. The Helicopter had also swerved almost as though to
obscure what happened next. Police report later
tried to pin an accusation that Mr. Crutcher was on
PCB, and that he might have tried to reach into his
car to take a gun.

But when it became clear that his car’s windows
were rolled up and that there was no gun in his car
or on his person, the story released by Officer Betty
Shelby changed: it was that she feared for her life.
“I have never been more frightened.” How could
an unarmed black man surrounded by about five white police officers all armed still elicit so much
fear? It is irrational. But nothing is rational about
racism.

And it is at the core of all the shootings of black
people, particularly black males by white police
officers. In the same week, Charlotte North Carolina
erupted into a paroxysm of sustained protests
against the brutal killing of another unarmed black
man Keith L. Scott on Tuesday by police in a parking space marked “Visitors” outside what has been
described as an “unremarkable apartment
complex.”

The unrest in Charlotte compelled the Governor of
North Carolina to declare a state of emergency and
bring out the National Guard.