Born Again: Donald Trump Urges Christians To Pray For Him As He Accepted Christ 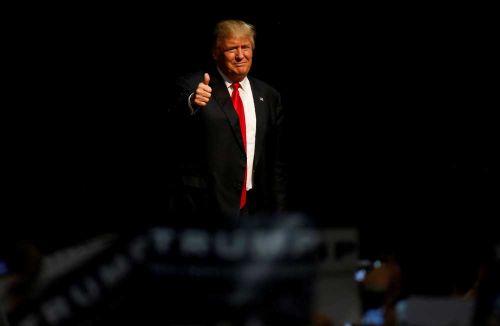 Dr. James Dobson, the founder of Focus on the
Family and Family Talk, says Donald Trump has
recently given his life to Jesus Christ and is now
“a baby Christian,” urging believers to pray for
him.

In an interview with Pastor Michael Anthony of GodFactor.com, Dobson said, “There are a lot of people ministering to him personally — a lot of
ministers… He did accept a relationship with
Christ. I know the person who led him to Christ,
and that’s fairly recent. I don’t know when it
was, but it has not been long.”

Dobson added: “I believe he really made a
commitment, but he’s a baby Christian. We all
need to be praying for him, especially if there is
a possibility of him being our next chief
executive officer.”

He said this at Trump’s closed-door meeting
last week with hundreds of top evangelical and
social conservative leaders. The meeting, “A
Conversation About America’s Future with
Donald Trump and Ben Carson,” was held in
New York City.

It is neither an “inquisition” nor a “coronation,”
but a “conversation,” Johnnie Moore, the
spokesperson for My Faith Votes, a non-
partisan organization focused on engaging the
25 million Christians who did not vote in 2012
and one of the two groups behind the meeting, told The Christian Post earlier. “The Trump
campaign has been unbelievably cooperative
to commit such time with these leaders … It is
the largest, most representative gathering of
national, Christian leaders I’ve seen in my
lifetime,” he added.

Trump’s campaign has not responded to
Dobson’s assertion.

Last year, Trump said he had never asked for
God’s forgiveness, and despite calling the Bible
his favorite book, he refused to name a favorite
verse. “The Bible means a lot to me, but I don’t
want to get into specifics,” he said.

He continued, Christians “got to cut him some
slack,” as “he didn’t grow up like we did. I
think there’s hope for him.”

After Trump’s meeting with evangelicals and
conservatives, the founder of the Faith &
Freedom Coalition Ralph Reed said the
presidential candidate “talked about personal
faith, importance of faith.”

“But he made it abundantly clear, ‘I don’t know
the Bible as well as you do, I’m not a
theologian, but I’m a Christian,” Reed said,
according to CNN. “He talked about his children and how he raised his children, moral values,
don’t smoke, don’t drink, don’t do drugs. It’s
not really our job to judge other peoples’
spiritual journey. Just because they’re not in
the same place we are, we accept him for who
he is now.”