BringBackOurGirls Statement For Day 800 Of Our Chibok Girls’ Abduction 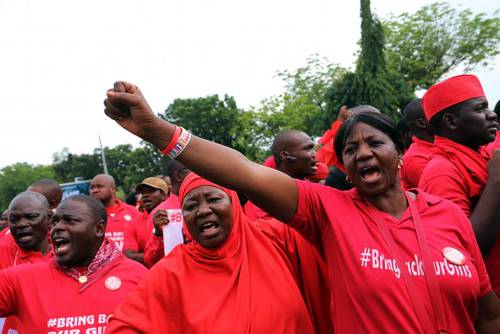 Today is 800 days since 276 schoolgirls of
Government Secondary School, Chibok were abducted from their school by terrorists on 14
April 2014. Fifty seven (57) of the schoolgirls
escaped during the period. On May 18th one of our
219 schools girls in captivity – Amina Ali- was
rescued  765 days after abduction through the
joint effort of the Nigerian Military and the Civilian Joint Task Force, therefore leaving 218 still in
terrorist stronghold. Today also marks 785 days
since our movement, #BringBackOurGirls has been
advocating for the safe rescue of our Chibok Girls,
all other abducted citizens and an end to the
insurgency.

We have a few matters of interest to highlight on
this Day 800 of our #ChibokGirls captivity.

1. THE STATUS OF RESCUED #CHIBOKGIRL–AMINA
ALI

On May 18, 2016, our Movement was elated at the
rescue of Amina Ali as it rekindled the hope of all
who have advocated for our schoolgirls that their
rescue is possible. We recall that a number of
promises were made at the reception held for
Amima Ali and her family, by President Muhammadu Buhari. The comforting word of the
President was “Although we cannot do anything
to reverse the horrors of her past, the federal
government can and will do everything possible to
ensure that the rest of her life takes a completely
different course” . That promise set the standard of expectation for the rehabilitation, resettlement and
reintegration of not only Amina Ali but her peers
and other abducted citizens once they are rescued
from terrorists.

It is now more than one month since Ms. Ali was
rescued and her avowed restoration process by
the Federal Government as pledged by the
President began. Having given reasonable length
of time, our Movement has a number of concerns
regarding Amina Ali as well as the rest of our ChibokGirls still in terrorist enclave.

1. Can the Federal Government respond to the
dissatisfaction expressed by the Chibok
Community on the lack of access of their leaders to
their daughter, Amina Ali since she was rescued?
We consider the collaboration and partnership of
the Community to which she belongs as extremely important for her full reintegration and therefore
advise the Federal Government to reach out to and
involve the Chibok Community in the welfare of the
rescued school girl.

2. Can the Federal Government transparently share
with the public the program of recovery being
implemented for Amina Ali? The promise of the
President that she will receive the best medical,
psychosocial and all such care necessary for her
wholesome restoration was very reassuring.  We however assert that one month after the promises
were made, it is proper that the Federal
Government should share what specific program is
on-going for Ms. Ali’s, her child and her mother’s
wellbeing. Extremely important to us are what
plans have been made for her eventual return to complete her education.

3. Can the Federal Government confirm to the
public that a thorough intelligence debriefing was
conducted with both Ms. Ali and the man,
Mohammed Hayyatu who was in her company
during her rescue? Were any useful information
gathered that can fill the gap in credible evidence that Mr. President had adduced during our meeting
on January 14, 2016 as the reason for non-rescue
of our Chibok Girls?

4. What is the status of the man who alleged
himself to be Amina Ali’s husband? Our Movement
repeats our demand earlier in May, that he must be
charged and prosecuted for the criminal act of
abduction and rape that resulted in Amina’s
pregnancy and child bearing. The secrecy attendant to the measures being taken to ensure
appropriate punishment for his criminality does
not bode well for building public trust in the
Federal Government. We recall that this is one of
the issues that greatly distressed the Chibok
Community Association and on which they demanded swift action from the Government. We
add our voice in demanding full disclosure from
the FG on what it is currently doing to ensure that
the arrested terrorist who claimed fatherhood for
Amina Ali’s child is appropriately tried and
convicted.

1. Following Amina Ali’s rescue 32 days ago, and
the rejoicing that followed, we had warned the
Federal Government to avoid a relapse into
bureaucratic inertia in the vigorous effort needed
to rescue the remaining 218 school girls. We are
extremely concerned that our warning may not have been heeded. Although we gave reasonable
time since May 19th for the FG to present Nigerians
with an update on its plans to upgrade the rescue
operation for the remaining 218 remaining girls in
the light of any credible intelligence information
provided by #AminaAli; we are extremely disappointed with the evident lull in rescue actions
and lack of any progress report.

2. Inevitably, the hope of the parents, relatives and
community of the rest of our abducted Chibok girls
became revitalized by the assurances made that
military action in Sambisa Forest would intensify to
retrieve their daughters. We, like their parents are
however now very concerned that since those reassurances were given, neither the President, the
FG nor the military have offered any progress
report. We therefore ask, “Is there still an active
operation mounted to rescue our 218 Chibok
Girls?”. If there is, what are the results and
expectations  so far from the effort?

3. We consider it paramount on this DAY800 of
their captivity, that  our President and Commander
in Chief of the Armed Forces who had promised
during the reception held for Amina Ali  that her
recovery invigorate the rescue mission for her
schoolmates should again speak to inform and reassure their parents and other Nigerians. At the
minimum, Mr President should direct the military to
provide a progress report to  the nation on their
effort.

4. We shall not cease to remind the Federal
Government of its constitutional duty to rescue our
ChibokGirls and all similarly abducted citizens of
Nigeria. We hope that within the next one month,
Mr. President and his administration will have
results of a reinvigorated rescue mission in the rescue of  all of them. Our Movement will continue
to demand a committed, strong, consistent,
sustained and effective operation. We may be
compelled to demand for a meeting in the coming
weeks to press our demand further.

We remind the Federal and Borno State
Governments that the Chibok Community has
made numerous demands for closed schools in
their community to be reopened after more than
two years of shutdown. They have many times
demanded for speedy reconstruction of the Government Secondary School from where our
ChibokGirls were abducted. They have many times
asked for progress report on the Safe Schools
Initiative that was launched to especially benefit
their schools and children and through which a
much dramatized reconstruction ground breaking ceremony was done by the previous
administration. We are similarly puzzled as to what
has stalled the rebuilding and reopening of the
school. We therefore advise the Federal and Borno
State Governments to be accountable and
responsive by engaging  with Chibok community to resolve these matters peaceably.

REPORTS OF INVESTIGATIONS INTO ABDUCTION

We also wish to remind Mr. President of two other
matters we have been waiting:

1. The release of the Major General Mohammed
Sabo Fact-Finding Committee Report of 2014 into
the abduction of Chibok School Girls submitted to
the former administration.

2. Details of the new investigation into the
abduction of OUR #ChibokGirls that National
Security Adviser announced to the public in
January, 2016 at the approval and instance of
President Muhammadu Buhari.

MORE VISIBLE AND RESULT BASED HUMANITARIAN
PROGRAM FOR IDPs

We are extremely appalled at the news coming out
of the Internally Displaced People’s camps in the
North East. Is the Federal Government aware of the
many evidence -backed reports of pillaging and
diversion of relief materials and the deaths of  IDPs
from hunger despite the huge sums of money allegedly budgeted for their wellbeing?