Buhari Cancels Trip To Sambisa Forest, To Be Represented By Defence Minister 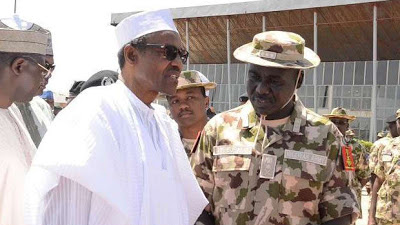 President Muhammadu Buhari has canceled his visit to the Sambisa Forest, the former head quarter of Boko Haram sect.

The minister of defence, Mansur Dan-Ali, will now represent the President at the event, Chief of Army Staff, Tukur Buratai disclosed this on Saturday, March 25.

No concrete reason was given for the cancellation.

Speaking to newsmen in Maiduguri, Buratai said Sambisa forest was chosen for the event to consolidate Nigerian Army’s grip on the area.

He said: “We have been in the north-east, fighting the Boko Haram terrorists, and you know the significance of the Sambisa forest to them.

“It used to be one of their centres; in fact, we suspect that their command and control centre was located there before its eventual capture.

“We also want the place to be dominated by our troops and also to get firm control, so that we will continue to dominate the area.”

The army chief said the championship was part of the training activities of the Nigerian Army, aimed at sharpening marksmanship of its personnel.

“The Nigerian Army Small Arms Championship is part of the training activities scheduled for 2017.

“It is a championship among the formations of the Nigerian Army.

“The objective of the event is to sharpen the marksmanship skills of the army personnel,” he added.