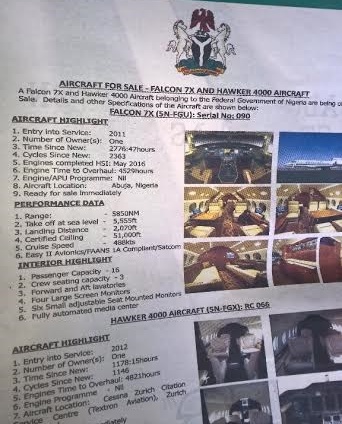 The Senior Special Assistant to President Buhari on Media and Publicity, Garba Shehu has confirmed the newspaper advert for the sale of two Presidential aircraft. In the statement issued on today Oct. 4th, Shehu stated that the sales were authorized by the President in order to cut down on waste.

“The newspaper advertisements for the sale of two Presidential aircraft, a Falcon 7x executive jet and Hawker 4000 were duly authorized by the Presidency.
This is in line with the directive of President Muhammadu Buhari that aircraft in the Presidential air fleet be reduced to cut down on waste. When he campaigned to be President, the then APC candidate Muhammadu Buhari, if you recall, promised to look at the presidential air fleet with view to cutting down on waste. His directive to a government committee on this assignment is that he liked to see a compact and reliable aircraft for the safe airlift of the President, the Vice President and other government officials that go on special missions. This exercise is by no means complete. I am sure the Commander of the Presidential air fleet will any time from now, call you to a ceremony at which he will hand over some other aircraft to the Airforce for their operations.”