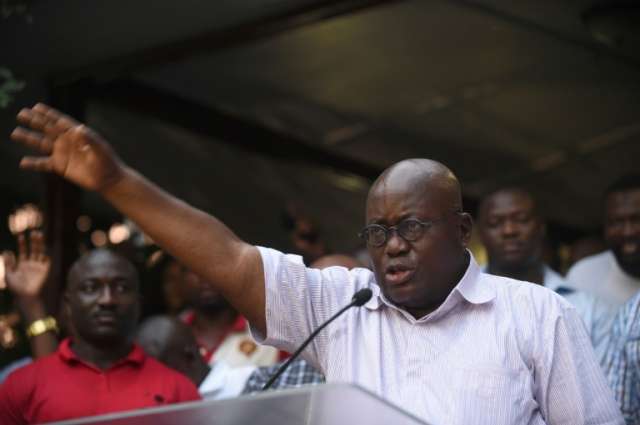 Buhari also felicitated with the Govt and people of Ghana, and candidates of political parties for maintaining decorum

President Muhammadu Buhari has congratulated the candidate of the New Patriotic Party (NPP), Mr Nana Akufo-Addo, on his historic win of the Ghana presidential election.

President Buhari also felicitated with the Government and people of Ghana, the National Electoral Commission, and candidates of political parties, for the decorum, maturity and peaceful conduct of the election.

The president made the congratulation in a statement issued by his Special Adviser on Media and Publicity, Mr Femi Adesina, on Saturday in Abuja.

Buhari noted that the Dec. 7 presidential election produced a winner from an opposition party, who was contesting for the third time.

According to Buhari, president-elect Akufo-Addo is widely experienced and skilled in leadership; a development he said would him to build on the legacies of President John Dramani Mahama.

The Nigerian leader also extolled the statesmanship and great leadership qualities of Mahama.

He noted that Mahama came to power at a trying period for Ghana with the death of former President John Atta-Mills and kept pushing for a better life for all Ghanaians.

He particularly commended the incumbent President for the great courage to call his opponent and concede defeat.

Buhari stressed that leaders must always honour their pre-election pledge to accept the results of polls as the will of the people.

He expressed optimism that the future of African development rested on building strong political, democratic institutions, ensuring free, fair and credible elections, and respect for the sanctity of the ballot.

Buhari urged the President-elect and other winners of the parliamentary elections in Ghana to be magnanimous in victory and called on those that lost in the election to explore peaceful and legal mechanisms to challenge the outcome of the polls, where necessary.

He said that the greater interest of the country and stability of the sub-region should be uppermost in the minds of all stakeholders.

The President wished Ghana a smooth transition of power, adding that he looked forward to working with the new President.