Buhari: What Was Nigeria’s President Like As A School Student? We Have An Answer 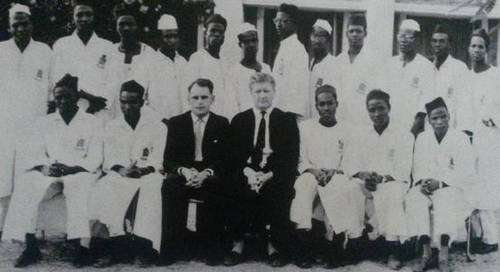 The biographer of the President, John Paden, has given us some insight into the life of Buhari as a student.

The official biographer of President Muhammadu Buhari, Prof. John Paden, has given us some interesting insights into what Buhari the student was like.
Nigerian parents are famous for telling their children, “when I was your age, I was this and that.” “I was the best student” etc. Well, John Paden’s book has proven that Buhari wasn’t really that type of student.

In his book titled “Muhammadu Buhari: The Challenge of Leadership in Nigeria”, John Paden described Buhari as a reluctant student.

Buhari often skipped school and was generally uninterested in school, mostly because of his love for the outdoors. And of course, he got flogged a lot for that.

Later, Buhari made a turnaround and became a serious student, thanks to two people; Waziri Al-Hassan and Mamman Daura.

According to Paden in chapter one of the book subtitled ‘Schooling and Leadership Values’:

“In part because of love for the outdoors, Buhari was a reluctant student in his early years. He would often skip school altogether, although this always resulted in beatings with a cane by the schoolmaster. Only with the encouragement of Waziri al-Hasan and Mamman Daura did he eventually settle down and take his studies seriously,”

After the turnaround, Buhari became more committed till he even went on to become Head Boy.

“The loss of his father at an early age was compensated for by British teachers who treated each student as if he was their own child. Buhari has often said that in the early days of his schooling, the British sent their best teachers out to northern Nigeria, not their worst. An American Peace Corps teacher in the school also impressed Buhari and the other boys with his love for biology,”

John Paden is a professor of Public and International Affairs and International Studies at George Mason University, and is also known to have written several books, including the biography of Ahmadu Bello in 1986.