Buhari Working With Those Who Will Pull Him Down – Rev. Mbaka 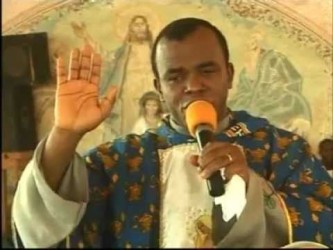 THE Enugu Catholic priest, and Spiritual Director of Adoration Ministry, Enugu State, Rev. Fr. Ejike Mbaka
has said President Muhammadu Buhari currently
works with some people who do not want him to
succeed in office and are desperate to pull him
down.

Mbaka has been one of Buhari’s most vocal
supporters since he asked Nigerians to reject
former president Goodluck Jonathan in the run-up
to the 2015 presidential election. The priest also
said it was too early to give Buhari’s regime a
dispassionate assessment, saying Nigerians should give the President more time.

The Enugu-based cleric said the reason the country
was yet to experience the real change being
midwifed by Buhari was that some strategic
positions were still manned by the same people
who milked the country dry in the past.

He said the president was not totally free from the
grip of those who ran the country aground in the
past.

Mbaka, who spoke to newsmen in Enugu during
the graduation of Niger Delta youths, who trained
at Innoson Plastic Factory under Federal
Government’s Amnesty Programme, said: “The
government we are experiencing is not yet a
Buharinised government.

“Many people who are in different strategic
positions are still the Peoples Democratic Party
(PDP) people and Buhari may not even know and
even some people who are working around him
are working to pull him down.

“Buhari means well, Buhari is a good man, Buhari is
God-sent for this country but, I am telling you that
there are crocodiles in the fish pond.

“Buhari may not know that he is feeding not the
fish in the fishpond but crocodiles that are even
feeding on the fishes!”

He urged Nigerians to be prayerful to counter the
activities of those he said were plotting to break the
country and take over power. Mbaka had, a month
ago come down hard on the Buhari regime, saying
there was hunger in the land and that the President
may not get the nod of Nigerians to get another term in office if the trend continued.

The cleric, who predicted the victory of Buhari in
the 2015 presidential election, said he was yet to
see the change he wants in Nigeria through the
present government.

“I am talking about change from corruption to
moral probity, a time Nigeria will become a country
that is worthy of emulation, that internationally
when you mention Nigeria, Nigerians shall begin to
smile. I am talking about change that is beyond
embezzlement of funds meant for the development of the people and country. Only few people who
call themselves politicians will be stealing the
money and whatever they are doing with it nobody
knows.

“The poor masses are dying and they are enriching
themselves wickedly calling themselves politicians,
so, such team of people should be changed and if
some of them are still remaining and they want to
come back, I still pray that the broom of God will
sweep them out because Nigeria must move forward.

“These people are wicked, they are not Nigerians
per say, I don’t know where their blood came from
because they are not representing us; they are
representing themselves and the devil that is using
them.

“If you know the pattern of their regime, the way
they move and the way they truncate the activities
that will be for the wellness of the poor masses,
you’ll know that some of them are possessed and
they need deliverance before they enter that seat.”

He, however, said it was too early to assess
President Buhari and asked Nigerians to give the
Buhari government the chance to implement its
change agenda.

Praying for the liberation of Nigeria, the Catholic
clergyman said: “I pray that our authentic
emancipation, what we call change will be
supernaturally propelled because right now you
can see the hand writing everywhere, many people
are complaining of hunger but the hunger is not Buhari engendered.

“Many are complaining that Buhari has not started
changing everything, Buhari is not a magician.

“Like I used to tell people, somebody had been
cooking in the kitchen for six years and he did not
feed us well and just few months ago, somebody
entered the same kitchen and all of us want him to
cook a very wonderful delicious soup whereby his
water is still in the pot. He has not started putting ingredients and people are testing the water and
saying he cannot cook well. Let us give him a
chance to pour the whole ingredients into the pot
and when he is done with cooking, we can now
judge him.

“It is too early to judge a man who has just entered
few months ago, remember, even the budget is
being attacked, padding or no padding and some
people want to baptise criminal fraudulent
machination with the name padding as a non
criminal offence. So, when you steal money that is in billions, it is padding and that one is a no
offence?