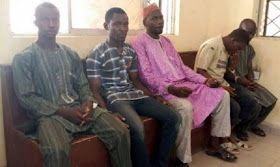 The Christian Association of Nigeria (CAN) has condemned the release of the five suspected killers of 74 year old christian woman, Bridget Agbahime, over allegations of blasphemy at Kofar Wambai market, Kano state on June 2nd this year. A magistrate court in Kano last week Thursday November 3rd, set the suspected murderers free on the advise of the Kano state attorney general(read here)
In a statement signed by its Director of Legal and Public Affairs, Kwamkur Samuel, CAN described the manner in which the case has so far been handled as highly provocative and insulting. The association decried the fact that no conviction has been made regarding any murder case that is linked to blasphemy.

“The Association condemns the continuous act of killing of innocent Nigerians under the pretense of blasphemy and considers the willful absence of justice for victims of these mindless killings in Nigeria by the relevant authorities as a very serious constitutional breach and security threat to our unity and collective survival as a nation. The now-familiar tradition of avoidance to arrest or properly investigate and prosecute cases involving the deliberate killing of innocent Nigerians is evidence of a scripted plan to operate another nation within the Nigerian state and to deny justice to those who truly deserve justice. The cardinal responsibility of Government to protect the lives and property of the citizens is sacrosanct and must not be sacrificed on the altar of religious convenience. As it stands today, there is no single prosecution record of any criminal who killed under the pretence of blasphemy in Nigeria despite the number of victims and incontrovertible facts showing that those killings were done in daylight and mostly by persons who live within the communities where these heinous crimes were committed. The act of condoning crass criminality in the name of blasphemy deserves greater attention and broader treatment in this era of transforming the mindset of the citizens to work toward progressive change”.