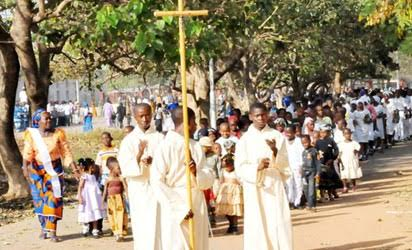 The Catholic Archbishop of Owerri Ecclesiastical Province, Most Rev. Dr. Anthony J. V.
Obinna, has laid laid the blame for what he termed “the violent and brutal nature of the Nigerian state,” at the door steps of the nation’s political leaders.

The cleric, who made his feelings known in Owerri
weekend, while fielding questions from journalists,
also accused the leaders of “apparent reluctance or
unwillingness to unify Nigerians on a properly
equilibrated level.“

According to the Archbishop, no true and lasting
peace, unity or unification can be attained without a
negotiated consensus.

“In a world and in a nation in which the dignity of
every human being is echoed as sacred, inalienable
and inviolable, no true and lasting peace, unity or
unification can be attained without a negotiated
consensus,” Obinna said.

It was his considered opinion that Nigerian leaders
need to respectfully acknowledge the country’s
multi-ethnic and multi-religious pluralism and bring
a more humane spirit into unifying Nigerians.

He also charged Nigerian leaders to create a more
peaceful environment, through a deliberate and equitable consensus, “otherwise, Nigeria will remain a continually embattled nation.”

After recalling how citizens and visitors travelled with ease and without fear of being regularly attacked by hoodlums along the nation’s
highways, Archbishop Obinna, however, lamented that things have changed today.

“Today, with hatred, violence and brutality being visibly visited upon citizens of our nation Nigeria and with impunity by Boko Haram members, Fulani herdsmen, sundry kidnappers, armed robbers and commandeered public security officials, traveling across Nigeria, has become a frightful hazard,” the Archbishop said.

It was therefore his submission that anybody that
successfully completes a trip and returns home
safely, will have every cause to be thankful to God.

“Imo State is not exempt from Nigeria’s overall
violent environment, with Awarra, Ohaji area an
embattled zone, leading to the phenomenon of
internally displaced persons among us”, Obinna
said.