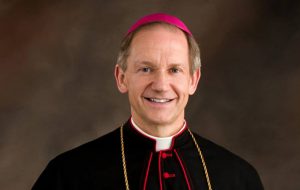 Even though Pope Francis has repeatedly said he believes in treating gay people with dignity and compassion, one Catholic Illinois Bishop Thomas Paprocki, apparently disagrees with him. Bishop Paprocki has issued a decree asking priests to deny gay people several religious offerings like the holy communion.
The decree, which isn’t public yet but was sent to staff, instructed priests not to give gay couples communion or their last rites until they repent for their relationship.
Paprocki also said that church property can’t be used for same-sex marriages and that no person in a gay relationship can become part of the Rite of Christian Initiation of Adults, a program that allows adults convert to Catholicism and be baptized.
Paprocki, who is a bishop of the Catholic Diocese in Springfield, IL,says he not backing down from the decree. He said

“These norms are necessary in light of changes in the law and in our culture regarding these issues”.

“If bishops ban members of same-sex marriages from receiving a Catholic funeral, they also have to be consistent. They must also ban divorced and remarried Catholics who have not received annulments, women who has or man who fathers a child out of wedlock, members of straight couples who are living together before marriage, and anyone using birth control. For those are all against church teaching as well.”