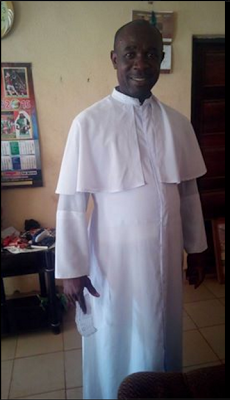 The parish priest of Saint Peter and Paul Catholic Church, Issele-Azagba, Issele-Uku Diocese, Delta State, Rv. Fr Jude Onyebadi has been kidnapped by suspected fulani herdsmen  with the kidnappers demanding for N20 million ransom. According to Sun, the Rev Father who is a renowned philanthropist and owner of one of the biggest commercial pineapple farms in the state was kidnapped last Friday, at his pineapple farm between Ubulu-Uku and Issele-Uku communities by three gunmen suspected to be Fulani herdsmen.
He was dragged into the bush by the abductors. The kidnappers opened negotiations immediately after his arrest and started with demanding for N50 million but reduced it N20 million ransom.

Director of Communications of the Diocese, Rev. Fr. Charles Uganwa confirmed the kidnap of his colleague and revealed that the church will never pay ransom to any kidnapper to free one of its own. He said the church doesn’t encourage payment of ransom to criminals as that will only help increase the rate of crimes.

Also speaking on the incident, Delta State Police Command spokesman, DSP Andrew Aniamaka has assured that the abducted cleric will rescued soon and unhurt. He urged the church and all those connected with him to cooperate with security operatives. He also revealed that they are already closing in on the kidnappers.

“We are combing the bushes and very soon, he will be freed. I can assure you that we are monitoring the kidnappers who keep shifting from one location to the other, but no matter how they may try to hide hide, we will get them. We are not just going to rescue the victim, we will also ensure that the hoodlums are arrested and brought to book,” he vowed.