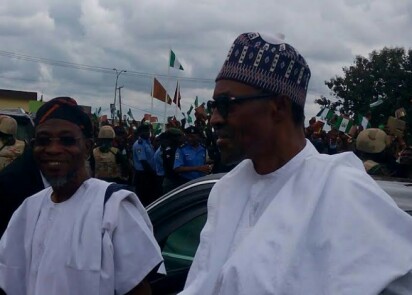 President Muhammadu Buhari on Thursday in Osogbo, Osun State, said the promised change for Nigeria will come, but with perseverance and hard work.

Mr. Buhari, who spoke at his one-day working visit to the state, also used the occasion to commission some projects executed by the Rauf Aregbesola administration, including the Osogbo Government High School which has about 3000 students capacity.

The president’s visit was the high point of activities during a week-long celebration of the state’s 25th anniversary.

“During our campaigns, we promised our people positive and progressive change,” he said.

“But history has taught us that change does not come as easy as that. Change will come after much hard work, patience and perseverance.

“We promised that we shall do everything for our country and our people and this won’t be long in coming.”

The president has been widely criticised for his administration’s inability to quickly turn around the distressed economy.

Mr. Buhari expressed his felicitation on the commemoration of the creation of Osun 25 years ago, saying its creation was for development.

“Our government has been helping states to realise their developmental plans irrespective of political parties,” Mr. Buhari said.

“We are here to commission Osogbo Government High School, one of the legacy projects of Rauf Aregbesola.

“The facility here is worthy of emulation by other states. What we are witnessing here is a fulfilment of our government policy on education.

“The economy of scales in this edifice is unquantifiable and so we must seize the opportunities the school has in stock.”

The Osun State Governor, Rauf Aregbesola, in his remarks, said the president had not disappointed the citizens as regards his promise to the people.

“He has not disappointed us. He has faced his task with courage and doggedness. No doubt, he is facing some challenges part of which is the fall in revenue that has put about 28 states under severe financial crisis,” Mr. Aregbesola said.

“He continues with a rare sense of doggedness and faith in God as he faces the turbulent situations. We are satisfied with the way he manages the affairs of the state and leads us.

“The challenges we are facing are as a result of the previous party’s (Peoples Democratic Party, PDP) rape of our resources.”

The governor put the cost of the school at N1.35 billion, and said the school had standard facilities.

He said besides classrooms, there are offices, laboratories, toilets, library, bookshop, sick bay, and multi-purpose hall which can accommodate 1000 students for examinations.

“It is part of our party’s manifesto to provide basic education and you can see that in the way All Progressive Congress governed states pay so much attention and commitment to education,” he said.

“When we came in here at Osun, we first held an education submit headed by Prof. Wole Soyinka. Now, we have built 14 elementary schools, 15 middle schools and 11 high schools.”

The sessions held under tight security and were attended by dignitaries, including Governors of Oyo, Borno and Lagos States, Abiola Ajimobi, Ibrahim Shettima and Akinwunmi Ambode respectively.

Deputy governors, ministers, members of the national and state houses assembly, and permanent secretaries were also in attendance.