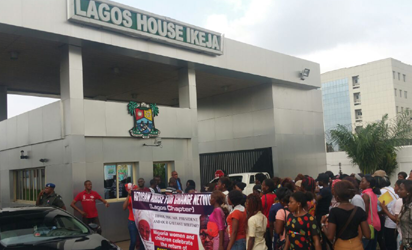 Sequel to last week’s rescue of 21 Chiboks girls from the captivity of the Boko Haram sect, women from different walks of life on Friday, staged a solidarity rally in Lagos, to commend President Muhammadu Buhari-led administration.

Gathering under the aegis of African Arise For Change Network, the women staged the peaceful protest around Ikeja axis before marching to office of the Lagos State Governor, Mr. Akinwunmi Ambode, to drop a letter of commendation for President Buhari‎.

Brandishing placards with inscriptions like ‎”Nigerian Women celebrate return of Chibok Girls, ‘Thank You Mr. President And Our Gallant Military’, ” Her Excellency Aisha Buhari remains a pillar of support in every sense to the IDPs and true to return of Chibok Girls,” the women said it is backing the administration’s efforts in rescuing the remaining Chibok Girls still held in captivity by the Boko Haram terrorists sect.

Speaking on behalf of the groups at the Government House, the Lagos Coordinator of the coalition, Mrs. Oluwatosin Bolarinwa, said the African Arise for Change Network is happy to receive the news that 21 of the abducted Chibok Girls that have been released from Boko Haram’s captivity following talks initiated by the Federal Government.

Bolarinwa said, “We can only imagine the emotions of the parents whose children have been returned bringing an end to months of harrowing experience for the families of these girls that have been freed.

“We celebrate with these families even as we acknowledge that there are uncertain times ahead as they work with the government to rehabilitate these young ones. The days and months ahead may be testing but we hope for a positive outcome in the reintegration of the girls in the firm belief that the harder part of their ordeal is over.

“We emphasise that no one, should have to live through that harrowing experience whether as the hostage, parents or family members. We are however confident that positive stories will spring from what was once a blot on the conscience of this nation.

“We therefore commend the Federal Government, ably led by President Muhammadu Buhari. His administration has turned around what many Nigerians had given up hope about. Not a few people had said the girls were lost forever but today the story is different. Not only has the first batch of 21 been free, we further have Mr. President’s assurances that we will soon be receiving more of the girls.”

They also lauded the Nigerian Army, and other security agencies for their efforts agencies, saying they were all instrumental in decimating the Boko Haram insurgency to the point where negotiation became possible.

“ Our particular respect to the families and loved ones of those who paid the supreme price in the course of fighting terrorism to ensure these girls regain their freedom.

“Our rally today is for no other reason than to say thank you to Mr. President, you promised to bring the girls back and some of us were already losing hope when it was taking time but today we are beginning to see the wisdom of focusing on getting the girls out safely as opposed to applying brute force.”

Receiving the women at the Lagos House, Ikeja, the Special Assistant to the Governor on Civic Engagement, Mr. Taiwo Ayedun, who addressed the group, said the government of Lagos State was elated that 21 Chibok Girls were released, saying that the governor will ensure that their letter is delivered to President Muhammadu Buhari.