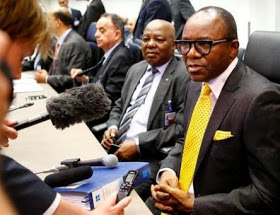 A Chinese delegation will visit Nigeria this month to discuss investment in the West African country’s oil and gas industry, Nigeria’s oil minister said on Wednesday.

In June, state-owned Nigerian National Petroleum Corporation (NNPC) said it had signed memorandums of understanding (MOUs) worth $80 billion with Chinese firms to invest in Nigeria’s oil and gas infrastructure but no details have emerged yet.

“We are having a team of over 40 Chinese … visiting Nigeria by the end of this month,” Oil Minister Emmanuel Ibe Kachikwu told reporters.

“I will say we have a one year period to work on this. We expect that some (investment) will come earlier,” he said, when asked about the agreements signed in June.

Nigeria, an OPEC member which was until recently Africa’s biggest oil producer, relies on crude sales for about 70 percent of national income but its oil and gas infrastructure is in need of updating.

Its four refineries are mostly out of action because of poor maintenance, forcing Nigeria to rely on expensive imported fuel for 80 percent of energy needs.

These problems have been exacerbated by a series of attacks on oil and gas facilities by militants in the southern Niger Delta energy hub.

Last month, the head of the upper house of parliament said Nigeria needed to consider selling oil and other state assets to help plug a budget deficit, caused by a collapse in oil revenues that has plunged Nigeria into recession.