Chris Pratt ‘God Used A Stranger, My son’s Deadly illness To Bring Me Closer To Him’ – Actor

A conversation with a stranger,led to a visit to the church and eventually Christianity for popular actor, Chris Pratt.

Hollywood and religion are two things that rarely go hand-in-hand except for rare cases like Chris Pratt.

In a recent interview with Vanity Fair, the popular actor talks about an interesting incident that led to Christianity and how his son’s life-threatening illness ‘redefined’ his faith in God.

Chris Pratt opens up on his faith 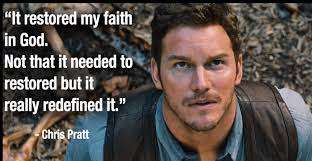 According to him, his first encounter with God was with a stranger, at a time when he was ‘lost.’

He said, “I was sitting outside a grocery store—we’d convinced someone to go in and buy us beer. This is Maui. And a guy named Henry came up and recognized something in me that needed to be saved. He asked what I was doing that night, and I was honest. I said, ‘My friend’s inside buying me alcohol.’ ‘You going to go party?’ he asked. ‘Yeah.’ ‘Drink and do drugs? Meet girls, fornication?’ I was like, ‘I hope so.’ I was charmed by this guy, don’t know why. He was an Asian dude, maybe Hawaiian, in his 40s. It should’ve made me nervous but didn’t. I said, ‘Why are you asking?’ He said, ‘Jesus told me to talk to you . . .’ At that moment I was like, I think I have to go with this guy. He took me to church. Over the next few days I surprised my friends by declaring that I was going to change my life.”

Chris Pratt opens up on his faith

This put Chris on a totally path that has been marked with a huge movies like 2014’s ‘Guardians of the Galaxy’  and 2016’s ‘Passengers’, that put him on the highest grossing actors list of 2014.

However, God was not done with him as the actor experienced another encounter that he says ‘redefined’ his walk with our maker.

In 2012, his wife, actress Anna Faris, gave birth to their son, who was born premature and fell into a coma.

Thankfully, their son made a miraculous recovery, and he told People magazine that this particular experience”redefined” his faith in God.

“We were scared for a long time. We prayed a lot.

It restored my faith in God, not that it needed to be restored, but it really redefined it. The baby was so beautiful to us, and I look back at the photos of him and it must have been jarring for other people to come in and see him, but to us he was so beautiful and perfect,” he said.

Chris joins the growing list of famous actors who have openly spoken about their faith in God.