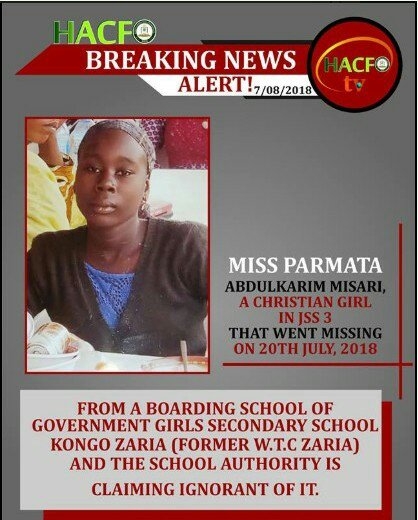 The Christian girl, Parmata Abdulkarim Misari, that was said to have gone missing from Government Secondary School Kongo, Zaria, (a boarding school in Kaduna state) on the 20th of July, 2018, has been freed. She regained her freedom from her alleged abductors on Thursday,16th of August, 2018 (yesterday).

It will be recalled that on the 7th of August, 2018, the Hausa Christians Foundation (HACFO), officially published Parmata’s story. It was reported that the JSS 3 schoolgirl allegedly went missing since July 20th, 2018 and the school authorities claimed to know nothing about it.

The girl’s parents, Mr. Abdulkarim and Mrs Hauwa Misari, were living with the assumption that their daughter was schooling and secured in the Boarding House, until they met with the strangest news of their lives, as they were told that their daughter is missing and that the entire School management was not aware until after four days.

On reaching the School, the School Matron went into the hostel to check for her and later came back to tell them that their daughter is not in the Hostel, but she is “within the Kongo neighborhood”. The Matron suggested that the principal of the school should be aware of the whereabouts of the missing girl.

On reaching the principal’s house, she said that she was just hearing the news for the first time. That was how Parmata’s Parents were left stranded with no one to tell them what happened to their daughter, and so decided to seek for the intervention of the Kaduna State Police Commissioner.

According to HAFCO, on the 20th of August, Parmata’s Matron, called her and gave her an exit gate pass to go home, on the ground that Parmata’s mum was very ill and that she should go home and see her mother. (Which was actually a lie).

On that very day, Parmata decided to go home and see her ill mother as was instructed by her Matron. On reaching the School gate, Parmata saw her Classmate together with a Young Man with a Motorcycle. The Classmate called Parmata and told her that the man with the motorcycle was the man she was to follow that will take her home. When She boarded the bike, the man took her straight to the village head of Tukur-Tukur Zaria. Thereafter, the village head, the district head and other Islamic leaders detained her, forcefully converted her to Islam, Changed her name from Parmata to Fatima, kept her with them and were homeschooling her on the tenants and rudiments of Islam as in new convert.

The Kaduna State Police command has been up and doing on the matter that even took them to Kano to trace Parmata’s whereabouts. On 15th of August, 2018 at around 9:30pm they eventually uncovered where Parmata was kept. Parmata was kept under the custody of the Village head’s wife who barely fed her one meal per day.

Parmata has not only gone through psychological trauma, but was subjected to inhumane treatment to the point that she has to go through medical and spiritual rehabilitation. The most painful of all is that Parmata has missed her JSSCE and is likely to repeat a year in that same class for her inability to write the exams with her fellow classmates.

Parmata was officially handed back to her Parents on 16th August, 2018, and she is currently undergoing some rehabilitation and medical treatments